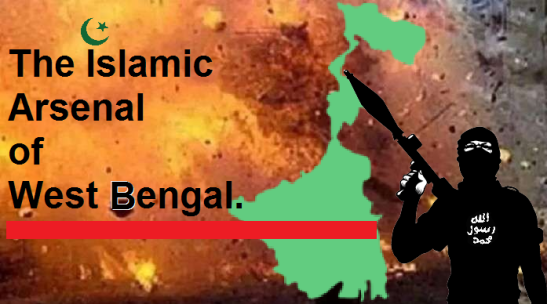 The Islamic Arsenal of Bengal.

According to STF sources, about 31 tons (26,500 kg) of ammonium nitrate has been recovered. Investigators are convinced that 61,000 pieces of detonators as well as a large amount of ammonium nitrate were stored for some bigger plan of subversive sabotage. Intensive investigations and searches have been launched to find out who was stockpiling these killing materials. Whether any militant organizations connected to Islamic or Maoist roots are behind it is also being investigated. Explosives experts say that RDX or nitrogel can be mixed with ammonium nitrate in large quantities to cause a large lethal explosion. What was rescued in Birbhum could be used to destroy a small to medium town. The National Investigation Agency (NIA) has launched an investigation into the incident.

The STF recovered the detonator from a lorry in Mohammadbazar on Thursday. A lorry driver named Ashish Keora was arrested first. He was interrogated and it was learned that there were more explosives in the Laxmanmara stone quarry area of ​​Nalhati. The STF then raided the place on Friday morning. As soon as they entered a godown, their eyes widened. As can be seen, ammonium nitrate filled bags are scattered everywhere. About 600 sacks of ammonium nitrate were seized. More explosives to match in a godown next door. The STF claimed that a record amount of explosives had been recovered.

They came to know that one Muslim Rintu Sheikh is the owner of this godown. He has been on the run since the detonator was recovered. According to the information available to the investigators, ammonium nitrate was brought from various factories in Jharkhand. These factories only supply explosives to licensed individuals or organizations. How it came to Rintu Sheikh’s godown without a license is being investigated.

According to STF sources, the explosives reached Sheikh  Rintu through at least three or four channels from Jharkhand. However, investigators try to uncover several others from Nalhati are involved in this cycle. It is learned that Sheikh Rintu, the owner of the concerned godown, works in a local quarry. Initially suspected, these explosives may have been brought in for the Maoists. Apart from this, the fear of JMB (Jamaat ul Mujaheedin Bangladesh) and other militant organizations being involved in the whole issue is not being dispelled. Birbhum came to the fore during the Khagragarh blast incident in 2014. The presence of the top heads of the JMB and the search for the sleeper cell were found there. Whether there is anything like that in this case too, that is the direction of the investigation now.