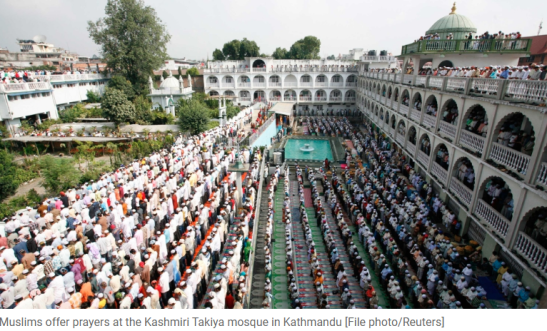 Once a Hindu Country Nepal is now under Jihadi Threat.

Upendra Bharti | HENB | New Delhi | Aug 10, 2022:: The conspiracy to make Nepal an Islamic state came to light. According to a report, a total of 24 Muslim organizations are active in Nepal at this time. And these organizations are taking forward the work of building mosques and madrasas (Islamic seminaries) all over Nepal including the Nepal-India border. To keep India under more Jihadi pressure, the plan to convert Nepal as an Islamic State is highly in the agenda of the Muslim radical organisations.

As per reports [1][2][3], most of the mosques and madrasas have been built in Uttarakhand’s Jauljibi, Pithoragarh, Banbasa, Dharchula, Jhulaghat and Khatima and Uttar Pradesh’s Bahraich, Basti, and Gorakhpur areas and the population of Muslims have also grown in towns and regions, all of which run adjacent to the Bharat-Nepal border. Reportedly, those settling along the GT road are largely Bangladeshi and Rohingya infiltrators. Actually, Muslims in Nepal have their plans to conquer Nepal village and area wise. At this stage they multiply their numbers by birth and infiltration both in the targeted villages and areas. Afterwards they aspire for the Islamic dividend nationwide. Huge foreign funds are being utilized for Islamic agenda in these areas both in India and Nepal sides as the reports confirm. 116 Villages along UP-Nepal border (both sides) are now 50% Muslim, 25% rise in madrasas and mosques, says the report.

According to special sources, 694 madrasas and mosques have already been built in the Terai area on the India-Nepal border. Of these, 364 mosques and 330 madrasas have been built so far. News is also coming that in the last two years, about 5 billion rupees have come to Nepal from Pakistan, Turkey and Qatar. Not only that, it is reported that a radical Muslim organization from India has also sent 47 crore rupees to Nepal.

Islam is the third largest religion in Nepal. According to the 2011 Nepal census, approximately 1.164 million Muslims, comprising 4.4% of the population, live in Nepal. Almost all of them live in the Terai Region.  Districts with large Muslim concentrations are:  Rautahat,  Banke,  Kapilvastu, Parsa,  Mahottari,  Bara and  Sunsari. As per census records there were 2, 09,718 Muslims in Nepal during 1952-54. But, the Muslim population in Nepal reached the mark of 11,62,370 in 2011 crossing 5 times growth. But, Maoist and Secular elements in Nepal always undermine this Islamic growth in the country as a threat to its Hindu character.

Eminent Hindu interlocutor and Hindu Existence Website Editor,  Upananda Brahmachari expressed his concern in his twitter handle, “Unless the Hindu organizations in Nepal and Bharat start a big campaign to stop Islamic conspiracy in Nepal and the Himalayan regions, the consequence  will be dangerous for both the countries.”

3 comments on “Huge Foreign Funds Being Used To Convert Nepal As Islamic Country.”

This entry was posted on August 10, 2022 by hinduexistence in Anti-Hindu, Conspiracy against Hindus, Conspiracy against India, Islamic Aggression in Nepal, Save Nepal from Maoist Conspiracy, SAVE NEPAL FROM SECULAR MENACE and tagged Conspiracy to make Nepal as Islamic Country, Huge Islamic Funds coming to Nepal, keep India under Jihadi pressure.