Hindus must start a Nation wide campaign against Chinese goods and Halal products in India.

Xinhua highlights Diwali festival in India to promote Chinese goods; Shame that the Hindus buy the goods made in China, who are completely anti-Indian by nature!

An appeal to start a Nation wide campaign against Chinese goods and Halal products. 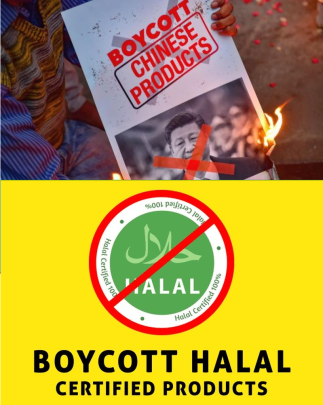 In the Xinhua reporting from Bangalore dated 23.10.2022, it comes with a headline, “Asia Album: Celebrations of Hindu festival Diwali in India.”

One can apprehend that this Diwali approach of Xinhua as a Chinese goodwill gesture to lessen the anti-Indian attitude of China as seen in its hard opposition to block Pakistan-based Jihadi leaders as global terrorist[1][2]; or in the dedicated endeavour in occupying Indian territory in Galwan in Ladakh heights and Sumdorong Chu valley in Arunachal Pradesh[1][2][3]; or in the perpetration on illegal Chinese encroachment on 38,000 sq. kms. of Indian territory[1][2]; or seen in the Chinese plan to divide India in 38 parts to disintegrate it.

But, No. This Diwali coverage of  Xinhua is nothing but another Chinese invasion in the economic sector with an intention of  capturing Diwali market in India which involves sales worth Rs 1,50,000 crore as per CAIT report.

In the reporting of Xinhua on Diwali, it is seen huge numbers of ‘Made in China’ lamps, lamp hangings, crockery etc are selling in Bangalore as the news agency included the pictures in it. 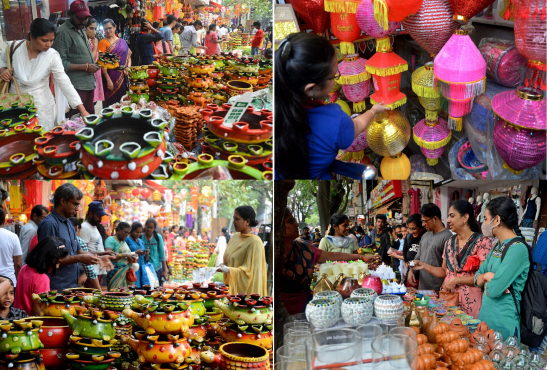 However, it is not the scene only seen in Bangalore. The ‘Made in China’ items like candles, ceramic oil lamps instead of earthen oil lamps, fire-crackers, other fire-works, gift items of Diwali, costume jewellery, chain of electrical lamps/bulbs, home decors, sweets and many other things are selling in markets ranging to metropolis to urban-rural sides during this crazy Diwali celebration to give a boost to Chinese economy depriving the Indian artisans, potters, confectioners/sweets makers, small scale enterprises and traders in a big way.

This war of ‘Made-in-India’ vs ‘Made-in-China’ is ultimately jeopardizing the Indian Economy by an inimical force within the loopholes of ‘Make-in-India’ strategy.

In this year, many Hindu organisations (not directly in Sangha parivar i.e. RSS-BJP-VHP fold) led by Hindu Janajagruti Samiti and Sri Ram Sena launched  a #Hala_Free_Diwali campaign[1][2][3][4] mainly in Karnataka and in some parts of Maharashtra. This is good in viewing the rapid growth of Halal industries and Halal Economics in India, directly connected to Jihadi terror and Islamic banking.  But nobody came this year to control the Chinese invasion in Indian economy so prominent during Diwali festivity.

Two-three yrs back, it was seen a campaign against the use of Chinese products in the ground level and in social media during Diwali with an appeal to use Indian products in this biggest Hindu festival. Such campaigns were usually influenced by Swadeshi Jagran Manch (SJM), an affiliate of RSS (Rashtriya Swaymsevak Sangha) and VHP (Vishva Hindu Parishad). But, they go inactive now to raise their voice against Halal or China both, very unfortunately. Most of the RSS, VHP and SJM leaders and supporters use Chinese smart phones and find no time to run movements against Halal or Made-in-China.

It is shameful that with an utter indulgence of a major section Hindu people influenced by secular zombies, the Halal economy and Made-in-China economy both are growing fast to weaken Indian economy and national prosperity. Halal and China both are dangerous to Indian security and National integrity.

Campaign against Halal must not limited to Diwali. It should go in national level along with the protest against Made-in-China.

The Halal lobby is obviously designed and funded by Arab world and Pakistani conspirators and Chinese lobby is the best friend of Pakistan.

In such a situation all the Hindutva organisations including Hindu Janajagruti Saminiti and Sri Ram Sena must start a nation wide campaign against Halal and use of Chinese goods to save Indian economy, safety and security.

One comment on “Hindus must start a Nation wide campaign against Chinese goods and Halal products in India. ”