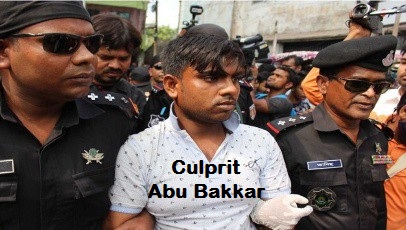 Khulna (Islamic Bangladesh): Trapping her in the net of ‘love jihad’, Abu Bakkar cut his Hindu lover Kavita Rani into pieces when exposed as married. Culprit Bakkar arrested by RAB.

Upama Das | HENB | Dhaka | Nov 13, 2022:: Religion has no place in a love relationship, maybe that’s what the Hindu girl thought like many others. That’s why she dreamed of building a house in love with a Muslim youth. But he never imagined the cruel fate that awaits her ultimately. Kalipad Bachar’s daughter, Kavita Rani, a resident of Satkhira Ashasuni – Kuter Bill area in Khulna, Bangladesh, was brutally murdered by her lover, who had left the house holding the hands of her lover, ignoring the thousand prohibitions from her parents. The police recovered Kavita Rani’s dismembered body from a rented house in Sonadanga police station area of ​​Khulna city. RAB (Rapid Action Battalion) -6 confirmed the identity of Kavita Rani last week Monday (November 7, 2022) afternoon. Since then, the investigation team was searching for Abu Bakkar, the girl’s lover. Finally, he was caught from Basan police station in Gazipur district.

After the arrest, the killer’s boyfriend was interrogated and sensational information came out. In a press conference, the spokesperson of RAB-6, Lt. Col. Mostak Ahmed described the gruesome incident of the murder. He said that Kavita Rani used to work as a nurse at Prince Hospital in Khulna city. Abu Bakkar and Kavita (hiding her own identity as Swapna) were living as husband and wife for 3 years in the house of a man named Raju on Gobarchaka road no 1. Despite the fact that Abu Bakkar was married, he did not disclose that information to Kavita. Kavita met Abu Bakkar just 5 days before coming to the rented house.

Lt. Col. Mostak Ahmed of RAB-6 said that on Saturday (November 5, 2022) last week, when Kavita returned to the rented house from duty, for some reason she started arguing with Abu Bakkar. Meanwhile, Abu strangulated Kavita to death. Then he brought a sharp weapon from the kitchen and dismembered Kavita’s body. Kavita’s severed head was wrapped in polythene. The rest of the body was put in a box. The next day around 11 am, the police recovered the body parts of Kavita Rani from the rented house at the Tetultala,  No. 1 Gobarchaka Cross Road in Khulna city.

Hindu minorities are treated as Dhimmis (captives under Islamic rules) or second class citizen in Bangladesh which’s state religion is Islam and propagation of Sharia by the fundamental Muslim people are all time high.