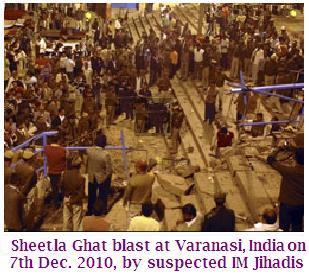 New Delhi: A blast rocked the ghaat of the Ganges in Varanasi on Tuesday as the evening aarti was going to commence at the Sheetla ghaat, leaving one 2-year old girl child (named Km Swastika Sharma) dead and at least 45, including some foreign tourists, injured.

An Italian and a French national were among the injured.

The Union Home Ministry confirmed the blast which occured at 6:30pm. Home Secretary GK Pillai told the media that an alert had been issued to all states, with special stress on four major cities – Delhi, Mumbai, Bangalore and Hyderabad.

PM Manmohan Singh has appealed for peace and sought a report from the Home Ministry. UPA chairperson Sonia Gandhi condemned the blast.

“Government condemns the attempt to disturb the peace and harmony by a misguided group which appears to have planted a low-intensity device in one of the ghats in Varanasi,” Home Minister P Chidambaram said.

Police officials said an explosive device had apparently been concealed in a crevice on the steps leading to the river and where hundreds of men and women were seated.

As several people fell down bleeding and injured, others desperately tried to escape, triggering a stampede that injured more people.

The injured, which includes foreigners, have been rushed to the Varanasi district hospital. ADG Brij Lal said seven injured and four have been hospitalised. He said the state ATS had reached the spot and investigations had begun.

Lal told reporters one foreigner was injured. However, doctors attending to the injured, said they had treated at least 20 victims including 5-6 foreigners. 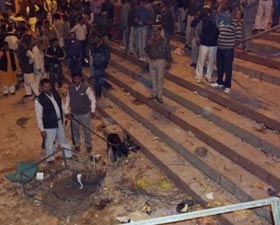 IG, Varanasi, RP Singh said on phone that the actual number of the injured and the cause of the blast was not immediately known.

Prem Prakash, DIG Varanasi said it was a low-intensity blast. He refused to confirm if there were any casualties. An alert has been sounded in the city.

“The UP police has informed us that so far there is no report on death and we are waiting for the details,” Secretary (Internal Security) U K Bansal said here.

The aarti of River Ganges is attended by hundreds of devout. The revered temple Lord Shiva, Mahakaaleshwar, is near the ghaat. The blast occured right outside the Sheetla Mata temple.

Tuesday is when a special aarti, called ‘maha-aarti takes place.

In India, offering aarti (rituals with five items including fire candling) to Ganges in the evening, is a very popular ritual and globally renowned for its colorful verities in Varanasi, Hardwar and Rishikesh. Thousands of Indian and foreigner viewers use to throng in the banks and Ghats (stairs) every day to watch this enchanting ritual ceremony in these places.

The blast led to a stampede and a wall collapsed which added to the confusion.

The stampede led to further injuries which may rise drastically. The area has been cordoned-off. Onlookers said.

Varanasi, which was rocked by twin blasts on March seven, 2006, has been under constant threat from various terror outfits like Lashkar-e-Toiba.

Today’s blast took place some two-km from Sankatmochan Temple which was targeted by terrorists in 2006.

Security personnel had then recovered four live bombs from a Dashaswamedh ghat.

Banned outfit Indian Mujahideen claimed responsibility in an email to various media houses. It said the bomb was exploded in protest against the ruling of the Ayodha verdict by Allahabad High Court earlier this year and also the clean chit given to CM Narendra Modi in Gujarat riots case by the Supreme Court appointed SIT.

The mail also referred to the recent manhandling of Kashmiri separatisis at various public forums in the country, asking Syed Ali shah Geelani and Mirwaiz Umar Farooque to “mantain their self-respect and dignity.”

To add to the panic, four Improvised Explosive Devices (IED) were also recovered from a dustbin at the blast site, indicating a plan of serial blasts. The mail was found to have been written from Malad in Mumbai.