Put Dr. Zakir Naik in Jail or Stop his Filthy Attitudes towards Hindus.

FIR LODGED AGAINST DR. ZAKIR NAIK FOR THE DEFAMATION OF LORD GANESH AND HINDU DHARMA. 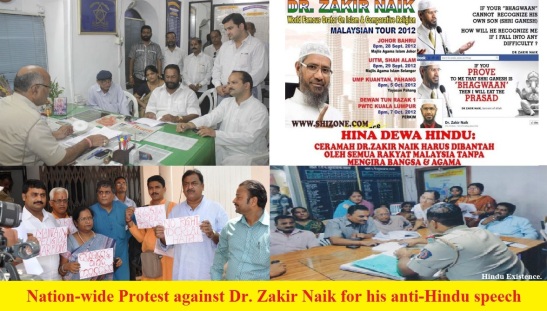 Mumbai| Nij Bhadrapad Shukla 10, Kaliyug Varsha 5114 | September 25, 2012   : The so-called Islamic thinker, Dr. Zakir Naik tried to hurt religious sentiments of Hindus by denigrating Shri Ganesh; that too, during the Ganesh Festival. He has given a challenge to Hindus, through the medium of ‘Facebook’ and ‘You-tube’, to prove that Shri Ganapati is a Deity. He also made an anti-Hindu statement that ‘If your God is unable to recognise his own son, how will he know that I am in danger’. By making such comments that too during Ganesh Festival, Dr. Naik has hurt religious sentiments of billions of Hindus. It has also created rage among members of Shiv Sena, BJP and various pro-Hindu organisations, Ganeshotsava Mandals and devout Hindus.

A complaint has been lodged by office bearers of Shiv Sena, BJP, Ganesha Festival Mandals and Hindu Janajagruti Samiti (HJS) with various Police Stations all over the State demanding that ‘when Ganesha Festival is being celebrated in peaceful atmosphere, Dr. Zakir Naik is trying to disturb Hindu-Muslim harmony by giving such challenge; therefore, case should be immediately filed against him’.

The above information was given by Mr. Ramsh Shinde, the national spokesperson of HJS in a press conference.

HJS has issued a circular in this connection. ‘Respecting religious sentiments of Muslims in the background of anti-Islam film, the Maharashtra Chief Minister meets their delegation immediately and assures to stop denigration of Islam taking place through the film. Similarly, it has to be seen whether the CM shows guts to take strict action against Dr. Zakir Naik who has hurt religious sentiments of Hindus by denigrating Shri Ganesh or as usual, the CM is going to bow before Muslims. When Ganesh Mandals display scene of Chhatrapati Shivaraya, Police issue notices claiming that such scene hurts religious sentiments of Muslims. Now, it is our demand that these Police should show promptness in taking action against a fanatic Muslim when proof of his denigrating Shri Ganesh is produced.’

Copy of the FIR:

Read details of the report here.

20 comments on “Put Dr. Zakir Naik in Jail or Stop his Filthy Attitudes towards Hindus.”