After Pakistan, Bangladesh will be almost Hindu-less Nation soon. 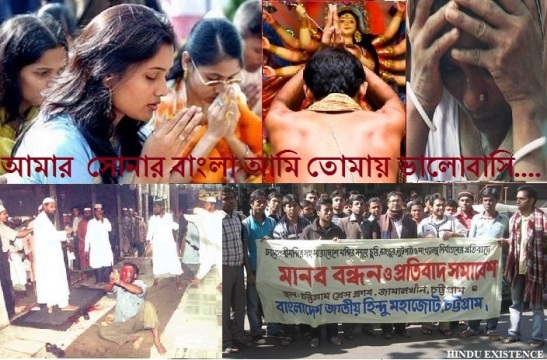 Rise of Islamists as well as greed of forceful occupation of Hindu properties has compelled hundreds of Hindu families in migrating to other countries, while Islamic Missionaries engaged in converting Hindus are also liable for such decrease in Hindu population in Bangladesh. Currently more than three hundred Islamic charitable organizations are actively engaged in patronizing and funding converting Hindus into Islam. At the same time, one of the reasons behind decrease in Hindu population is lesser rate of total fertility rate. Hindus in Bangladesh started migrating to various countries, including neighboring India since the partition of British India in 1947. Muslim influential figures in various parts of Bangladesh, irrespective of their political identities have been continuing to force hundreds Hindu families in selling their properties at unbelievably cheaper price and migrate mostly to India in order to skip numerous forms of repressive actions. If any Hindu tried to protect their ancestral property and resist undue pressure of the Muslims, either their houses were set on fire or female members of those families were forcefully abducted as well as gang-raped. In most cases, law enforcing agencies, instead of standing in protecting the Hindu families, tried to defend the perpetrators, simply because of their political identity or social status. Whichever party came in power in Bangladesh, repression on Hindus never stopped, as it has become a type of social disease within the Muslim population of Bangladesh in applying repressive actions on the Hindus and other religious minority groups, thus finally compelling them in leaving the country by selling their properties only at a token price.

Secretary General of Bangladesh National Hindu Grand Alliance, advocate Gobinda Chandra Pramanik said, “Hindu girls are becoming victim of abduction and rape on an increased frequency. That is why, most of the Hindu families in Bangladesh either send their girl children to various educational institutions in India or get them married at tinder age simply to save their religious and social dignity.”

He said, “Though some of the Hindu rights groups are falsely claiming that the forceful migration of Hindu families had decreased since Bangladesh Awami League came in power, the reality is actually just the opposite. Even during this present government, which came in power in 2009, there had been numerous attacks on Hindu families and temples in the country as well as alarming rise in the forceful abduction and religious conversion of Hindu girls and boys throughout the country.”

Citing example of Gopalganj district in Bangladesh, which is considered to be the exclusive vote bank of Bangladesh Awami League and safe heaven for the Hindus, Gobinda Chandra Pramanik said, “In 2001, the total Hindu population at Gopalganj district was 371,000, while now it has gone down below fifty thousand. This statistics will prove the fact of repression on Hindu population even in the district, which is wrongly considered as ‘safe heaven’ for the Hindus in Bangladesh.”

He said, “The burden of ‘Enemy Property Act’, which later was changed into ‘Vested Property Act’ has already caused hundreds and thousands of Hindu families in leaving Bangladesh either by selling their properties at token price or simply abandoning their ancestral properties into the grips of the greedy Muslim influential figures belonging to Bangladesh Awami League, Bangladesh Nationalist Party, Bangladesh Jamaat-e-Islami and Jatiyo Party. Though a large proportion of the Hindu populations consider Bangladesh Awami League as their own party and almost as guardians of protecting the rights of Hindus, in the past, very unfortunately, Awami League never kept its promises in protecting the Hindus.”

Seeking anonymity, a Hindu community leader in Gopalganj district said, “Bangladesh Awami League though proclaims to be a party totally committed to protecting rights of Hindus and religious minorities in Bangladesh, unfortunately their political behavior is no different than any other political party in Bangladesh. No Hindu has ever been placed into top most posts in the Central Committee or district level committees of Bangladesh Awami League. Though it is very unfortunate, but this is the ground reality.”

3 comments on “After Pakistan, Bangladesh will be almost Hindu-less Nation soon.”