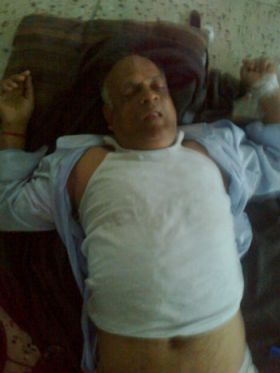 Air Poisoned Sri Ghosh is being found senseless and treated in a Natore Hospital.

Agencies | Natore (Bangladesh) | 29 July 2013:: Adv. Rabindra Ghosh – Founder President of BANGLADESH MINORITY WATCH and Observer of Global Human Rights Defense and his colleague Ganesh Rajbongshi was air poisoned and became senseless for 28 hours on 27th night near Natore Bus Stand while they were returning from Khulna by Train (Shimanta  Express) to Natore for monitoring another case of land grabbing from by Muslim land sharks.

Some Islamic groups in Bangladesh have been rampantly disowning the Hindus from their landed properties. Hindus in Bangladesh are facing a dire consequences under the overall threats from the Talibanic forces very much active in Bangladesh.

Now both the victims have got their senses and medical treatment is going on. Advocate Rabindra Ghosh lodged Firist information report (FIR) being Natore Sadar P.S. case No.42 dated 28.07.2013 under section 341/328/307/379/109 of Penal code against unknown perpetrators.

Mr. Ghosh and Ganesh Rajbonshi met with the Superintendent of Police, Natore who interrogated them and directed Md. Abdus Sattar, O.C. in charge –Natore Sadar for necessary action.

Bangladesh Minority Watch, Global Human Rights Defense and  Bangladesh Centre for Human Rights and Development (BCHRD) are very much concerned about repeated attack on Adv. Rabindra Ghosh and his associates. We also demand immediate arrest of the perpetrators and demand justice in the eye of law.

As per latest report, the culprits are still away from any proper identification under the blatant reluctance of the investigative and police authorities of Bangladesh under the influence of majority Muslim perpetrators.

Sri Rabindranath Ghosh joined the Hindu Rashtra Adhiveshan organised by Hindu Janajagruti Samiti on 6th to 10th June in Goa, in which Sri Ghosh highlighted the matter of persecution and atrocities upon Bangladesh Hindu Minorities every effectively. Returing to Bangladesh, he had been facing various threats from Muslim fanatics to stop his normal activities to restore the rights of Bangladesh minorities including marginalized Hindus.

Hindu Existence Forum vehemently protests such Islamic attack upon Rights activities in the cause of the freedom of minority people under the onslaught of  Islamic fundamentalism.

In a press statement, Rev. Upananda Brahmachari, Chairman of Hindu Existence Forum strongly protested the attack upon Sri Rabindranath Ghosh and wish his speedy  recovery with his aides.