Jammu : Post- Eid celebrations, fanatics in Kishtwad went on a rampage burning down Hindu homes. This ‘fire’ has now spread to the entire state of Jammu and Kashmir. Lethargic Hindus have been galvanized into action by this and incidents of stone pelting by fanatics on Friday. Hindu youth are fiercely responding to every fanatic mouthing ‘Allahu Akbar’ with chants of ‘Garv se kaho hum Hindu Hain’ ! Today, matters came to a head, when furious Hindus confronted groups of fanatics, and even the police and reserve police forces. This tit for tat strategy employed by Hindus is now resonating even in far flung villages of Jammu. AGAINST

Jammu | 11 Aug 2013::  The J&K government has suspended the Amarnath Yatra until further notice owing to Friday’s communal clashes in Kishtwar. The violence-hit district was curfew-bound on Saturday with the administration announcing that the death toll had risen to two.

“No fresh batch of pilgrims has been allowed to proceed to the Amarnath cave shrine in south Kashmir Himalayas from Jammu on Saturday,” the police said. Apart from the deaths, more than 25 people were injured in the clashes. The curfew would remain until the tension subsided though there was no report of any more untoward incident. Normal life was hit in Jammu and adjoining districts due to a BJP-backed bandh on Saturday.

The J&K highway remained blocked at several places as protesters burnt tyres, sat on dharnas and put up barricades in Vijaypur in Samba, Rajpora in Kathua, Udhampur and Gangyal areas.

The administration has also suspended the Machail Yatra in the district’s Padder area owing to the volatile situation. The administration transported pilgrims in Kishtwar to Udhampur and Jammu under security cover late evening on Friday. However, the Buddha Amarnath Yatra will continue with a batch of 554 pilgrims leaving for the shrine of Lord Shiva in Mandi hills in Poonch district, from here.

J&K deputy CM Tara Chand appealed for peace, stressing that the priority should be to ensure that the situation is brought under control. 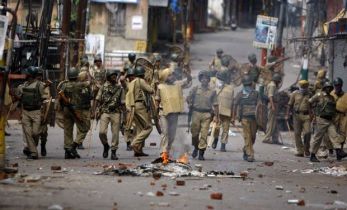 In an Islamic hell named Kashmir.

Jammu & Srinagar | 11 Aug 2013:: Senior BJP leader Arun Jaitley and PDP chief Mehbooba Mufti were among the leaders who were stopped by authorities from visiting Kishtwar district which has been hit by communal violence in the past few days.

J-K Chief Minister Omar Abdullah appeals to people not to fall prey to rumours about situation in violence-hit Kishtwar.

Curfew today clamped in three more districts of Udhampur, Samba and Kathua in Jammu region and Army staged flag marches as tension prevailed following outbreak of communal violence in Kishtwar on Friday that left two persons dead and scores of others injured.

While Kistwar remained curfew bound for the third consecutive day today, curfew was imposed in Jammu and Rajouri districts and Army called out after some incidents of arson and violence last night.

“Army has also been deployed in the areas to assist local administration”, Divisional Commissioner, Jammu, Shantmanu told PTI. “The situation is tense but under control. There are no reports of any untoward incident today. Army has staged flag marches in several areas.”

Chief Minister Omar Abdullah appeals to people not to fall prey to rumours. He assured swift action on inquiry report on Kishtwar incident and asked people not to allow political parties to exploit their sentiments.

Government will ensure most severe punishment to those responsible for death and destruction in Kishtwar, he said.

Omar also said that politicians including Arun Jaitley will not be allowed to visit the violence-affected areas.

Jaitley was detained as he arrived at the airport in Jammu on his way to communal violence-hit Kishtwar, which was made out of bounds for political leaders by J-K government.

BJP Rajya Sabha MP from Punjab Avinash Rai Khanna, who was to accompany Jaitley to Kishtwar, was also detained by police while he was trying to enter Kathua this morning.

Narendra Modi, who is Hyderabad for an election campaign rally, immediately tweeted, “Heard that Shri Arun Jaitley & other Opposition leaders are not allowed to go to Kishtwar. This is undemocratic.”

Have duty towards people: Mufti

“A police team has been deployed outside the main gate of my residence and we are not being allowed to leave the premises,” Mehbooba told PTI.

The PDP president said she along with some other party colleagues wanted to visit Kishtwar town, which has been hit by communal violence since Eid on Friday.

The PDP president said she had a duty towards the people of the state as she is the leader of the opposition in the state assembly.

“I have some duty towards the people as leader of opposition. Our visit to the area was with the aim of calming the frayed tempers. We are a responsible party,” she added.

Shoot at sight ordered in Kishtwar

Following renewed violence, the authorities have issued shoot-at-sight orders and the Army on Saturday again staged a flag march through the streets of Kishtwar town.

The SPs of Udhampur, Kathua and Samba districts are monitoring the situation round-the clock. Pathankote-Jammu-Srinagar highway, which is the only surface link between Kashmir and rest of the country is being kept open by the authorities amid deployment of additional forces.

Restrictions have been imposed on assembly of people in areas other than under curfew, police said. Authorities imposed curfew and deployed army in the Jammu and Rajouri districts last night after some incidents of arson and communal tension.

Public transport was off the roads but few private cars and autorickshaws were seen plying.

The authorities have kept police and paramilitary personnel on the stand-by to meet any eventuality in the city and other vulnerable areas of the Valley, official sources said.