Muslim Trinamul Congress leader arrested with 45 kg Gold and allegedly to use it for election purposes. 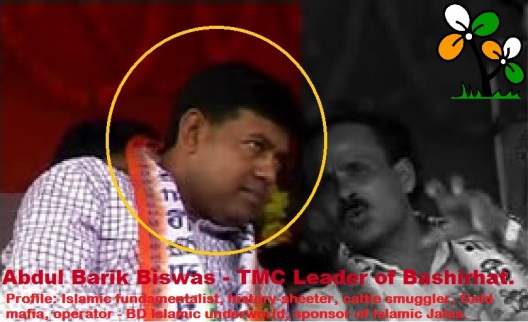 Upananda Brahmachari | Basirthat & Kolkata | 09 March 2014:: One Muslim leader of Trinamul (TMC) Congress party was arrested with 45 kg of unauthorized Gold bar in a southern district of West Bengal on Sunday while tried to escape by a car with a sticker leveling as ”PRESS”. From the tip of the source it is now being verified whether these huge amount of Gold brought through cross border international gold mafia gang, was meant for the use of the illegal expenditure of the State ruling party in West Bengal for the ensuing Gen Election purposes. Interestingly, the Muslim mafia gangs in West Bengal have invested a huge money in Media Sector and Medical Centers (Nursing Homes and Diagnostics Points)  from where they enjoy a big advantage of using Press Cars and Ambulances.

Recently, TMC sent a controversial Muslim Editor of a Bengali Daily from Kolkata to Rajya Sabha, whose name is tagged with SIMI, Jammat and other fundamental groups. It is found that the particular Muslim Media house distributed numbers of PRESS CARDS to many Muslim youths, who are more interested in Islamic activities than their stipulated job of news reporting.

The seizure of such an amount of Gold is the biggest single haul of gold in the state of West Bengal, perhaps one of the biggest anywhere in India in recent times.

This sleuths of India’s Directorate of Revenue Intelligence hit a jackpot near Kolkata on Sunday, seizing 45 kgs of contraband gold from a local Muslim leader of the West Bengal’s Trinamul Congress.

DRI officials have not detailed for the intrest of further investigation and actually  they were busy in trying to produce the Trinamul leader and his driver  in Bankshall Court in Kolkata and getting them on remand for questioning.

Late on Sunday a court in Kolkata sent both Abdul Barik Biswas and his driver Moksad Mondal to jail custody until Mar 12 to facilitate questioning by the police. 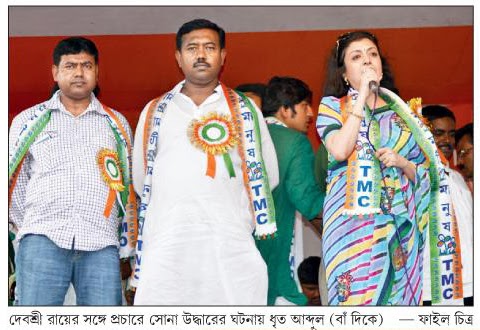 One DRI official on condition of anonymity had told aspirant news agencies that “Barik Biswas and driver Moksad Mondal both were taken into custody with the entire consignment — 45 kgs of gold in bars and biscuits”.

He said it appears the consignment was brought in from across the border in Bangladesh, but confirmation is awaited on that.

Abdul Barik is the brother of Golam Biswas, a Zila Parishad (District Panchayet Council) member of North 24 Parganas district from the Trinamul Congress.

Both brothers are  well known in District Trinamul organisation and they are usually seen jointly in Trinamul meetings and rallies on regular basis in the district of North 24 Parganas bordering with Bangladesh.

BSF officials say Abdul Barik is a history-sheeter and a known cattle smuggler who has extensive links with the underworld in Bangladesh.

In the recent time Abdul Barik has sponsored at least 10 Islamic Jalsas (overnight Islamic Conference), which have boomed  the fundamental activities in the ares under his control.

But, under the high indulgence of TMC supremo, such underworld dons and communal leaders of Muslim community have taken the shelters in Trinamul Congress and Mamata Banerjee  really  feels proud of these Muslim supports that have been garnered in TMC to make her victorious in any level by Muslim muscle powers.

In the border of North 24 Pgs, Nadia, Murshidabad, Malda,  Uttar Dinajpur, the Muslim mafias are controlling both the underworld and the TMC politics as well. For the purpose of electioneering and the fund management these Muslim mafias are busy to get more money for TMC through illegal business of gold, fake-notes, arms and cow-smuggling, as says a very confidential but high source.

Abdul Barik and his gang  hail from Sangrampur near Basirhat in North24 Parganas district, north of Kolkata.

Some Trinamul Congress leaders in this district have alleged links with ‘fundamentalist groups’ in close circuit of  Bangladesh. This has been claimed by the Opposition Left Front in West Bengal. 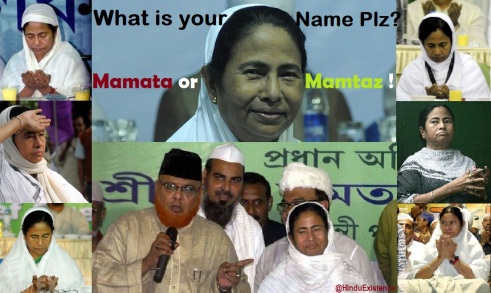 Some suspect that WB Chief Minister has been converted to Islam and named Mamtaz Banu.

Left Front Chairman Biman Bose had alleged that Trinamul Congress leaders are sheltering Islamist fundamentalists when they are fleeing into West Bengal to escape security operations in Bangladesh.

The Left has even alleged that some of these leaders have been given nominations for parliament berths by Trinamul Chief Mamata Banerjee.

“Bangladesh is more important for us, not Pakistan. So is she adversely affecting our relations with Bangladesh and trying to improve it with Pakistan,” Bhattacharya had said.

Just after sworn in the post of Chief Minister , the the CM Buddhadev Bhattacharya once pointed out the subversive roles of the Mosques and Madrasas in the border district of West Bengal.  But, now those Madrasa and Mosques are really controlling and directing the TMC to rule West Bengal as a forthcoming Islamic zone.

To get an easy gain of minority politics, Mamata Banerjee doing the worst for the Civil society of West Bengal as she is playing with fundamental fire of Islam to ruin the rest.

Allegations surface that suspected smuggler was issued permit despite objections.

One comment on “Muslim Trinamul Congress leader arrested with 45 kg Gold and allegedly to use it for election purposes.”