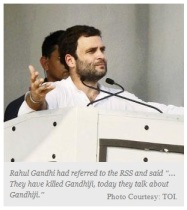 TNN | Bangalore | Mar 8, 2014::  The Rashtriya Swayamsevak Sangh filed a complaint with the Election Commission on Friday against Congress vice-president Rahul Gandhi for his speech at Sonale village in Thane, Maharashtra, calling it “politically motivated false propaganda”.

Alleging Rahul had made several false, unverified and unfounded allegations against the sangh during his Maharashtra tour, RSS spokesman Ram Madhav said, “The complainant wishes to point out that the statement by Rahul Gandhi was made deliberately, with ulterior political motive … equating the RSS with BJP and to spread hatred against both in sections of society.”

Charging Rahul with violating the model code of conduct, the RSS demanded “appropriate” action against him. In the contentious speech, Rahul had referred to the RSS and said “… They have killed Gandhiji, today they talk about Gandhiji.” RSS alleged that the unverified statements against it were made in a Muslim-dominated district. “He linked RSS to the BJP, a rival of the Congress,” the complaint reads.

Stressing that the media coverage of the speech by several TV channels and print media was sufficient evidence, the organization argued that such statements were made to spread hatred.

“The complainant submits that Rahul, by making offensive remarks in a predominantly Muslim area, has sent a message to the community that the RSS got Mahatma Gandhi killed. The utterances were clearly aimed at and amounted to an activity which may aggravate differences and create mutual hatred between Hindus and Muslims,” the complaint read.

Madhav, who is member, central executive committee, RSS, said he filed the complaint in Bangalore as all senior RSS functionaries are here in connection with the Akhil Bharatiya Pratinidhi Sabha.

Daily Bhaskar   |  New Delhi | Mar 07, 2014:: Taking offence to the remarks made by Rahul Gandhi which accused Rahstriya Swayamsevak Sangh (RSS) of killing Mahatma Gandhi, the volunteer Hindu nationalist group is planning to initiate legal action against the Congress vice president and also register a complaint with the Election Commission.

Ram Madhav, the RSS spokesperson tweeted earlier in the day “Legal action will be initiated against Rahul Gandhi for his irresponsible utterances linking RSS with Gandhi’s murder. Complaint will be filed with EC too.”
….
Reportedly, the Gandhi scion had accused the Sangh of taking active part in the murder of Mahatma Gandhi during his political rally in Maharashtra yesterday.
…
Related: RSS functionary Ram Madhav led delegation files complaint against Congress leader Rahul Gandhi – Samvada.Org
…