India vows more pro-active preparedness to combat Jihadi terrorism in and out.

In an avenging strategy of India towards Islamic Jihad, it will be the ‘Last Jihad’ if Ghazwa-e-Hind comes to India for their ‘Final Jihad’.

Upananda Brahmachari | HE Media Bureau | New Delhi | Aug 1st, 2014:: Cross border terrorism spreading inside India as promoted by ISI (Inter Intelligence Services) and Jihadi elements nurtured in Pakistan and Arabic Belt (counties believe in pan Islamism, i.e. Quranic doctrine of Jehad to spread Arabic Imperialism), is the most vicious threat to India’s internal security and integrity and obviously the sub continental peace and harmony. India has taken a vow to combat the Jihadi terror in and out and defuse all the subversive outfits taking the support of Jihadi evil force to disintegrate India in a joint venture.

Most recently, Al-Qaeda planned the Final Jihad for India. Intel reports  points to terror recruitment drive targeting nation’s Muslims with a full fledged drive.   Intelligence agencies also have confirmed  that the terror network is making inroads into India, sowing the seeds of a “final war”,  across the country. Ghazwa-e-Hind refers to an indoctrinated view of a final apocalyptic war in which India will be conquered by a jihadi army. All soldiers of this jihadi army are guaranteed a place in heaven. A detailed report has been surfaced in Daily Mail and in some Indian news papers also.

The report carries on:  ‘This term is freely used in jihadi circles and on the web, but is considered bizarre by others.

Sources say the security establishment has been on the trail of launch-pads being set up within the country, and is also in touch with its counterparts in West Asia in order to crack the growing network.

To begin with, the terror group that was created and led by Arab fighters now has recruits from Kashmir-centric groups.

The Al-Qaeda nexus with Kashmir-centric groups  and emergence of ISIS flag with J&K separatists indicates that it has a ready made jihadi framework in India with the help of various religious and political Muslim groups increasing their power day by day.

There are many other proofs too of Al-Qaeda using its nexus with Indian groups to spread its ideology in its  multifarious activities in Mosques, Islamic Institutions and NGOs.

The situation is more than dangerous. A high recruitment hunt is hectically operated in Indian states of Delhi, Uttar Pradesh, Bihar, Gujarat and South and Eastern India to join the global jihad. Incidentally, these are the areas where Muslim young men were recruited by the Indian Mujahideen (IM), India’s homegrown terror group that has become synonymous with bomb blasts in public places.

Though the IM facing a major setback because of a series of arrests, including that of its top leader Yasin Bhatkal, sources say Indians fighting in Iraq for terror group Islamic State of Iraq and Syria (ISIS) are part of larger scheme. Four some Indian Muslim youth from Mumbai are under scanner who joined ISIS training camps in Iraq and Syria. 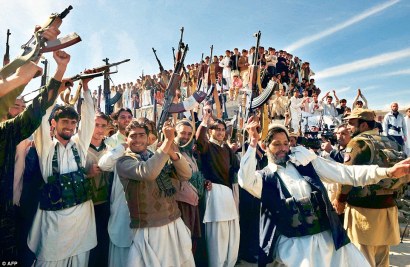 Tribal militias from Pakistan (in photo) are prime candidates for the Ghazwa-e-Hind. Photo Courtesy: AFP.

Many more recruits are getting attracted to the global jihad that can later be used to wage war against India. And the expansion of this Jihad is also active in Bangladesh, Sri Lanka, Nepal and Myanmar in Indian subcontinent. ISI, Al-Qaeda and Hizbul Mujaheddin are helping any subversive forces in any country as the game plan to upsurge a very critical Islamic situation there as a high pressure group.

As India is now well aware of these facts now it is time for a serious change to curb any epi-center of Jihad wherever it may be in Pakistan, Afghanistan or the sub-centers in its own soil of Kashmir, Kerala or Hyderabad.

On his first day in office, new Army Chief of India, Gen Dalbir Singh Suhag on 1st Aug. warned Pakistan that India’s response to any beheading-like incident in future would be “more than adequate, intense and immediate”.

“I can tell you that our response to any such act will be more than adequate in future. It will be intense and immediate,” he told reporters after his welcome Guard of Honour as Chief of Army Staff.

The new Army Chief was asked how did India give a ‘befitting reply’ to Pakistan after the beheading of Indian soldier Lance Naik Hemraj along the Line of Control in Poonch sector on January 8, last year by Pakistani troops.

Listing out his focus areas, Gen Suhag said they “would be to enhance operational preparedness and the effectiveness of the Indian Army.

“Force modernisation, infrastructure development, optimisation of human resources, welfare of serving personnel and ex-servicemen are issues that are very close to my heart.” 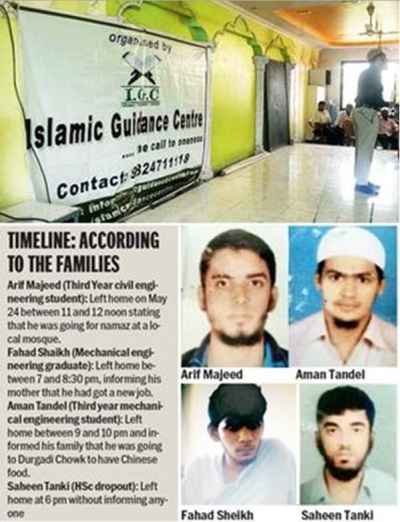 He said he would do his best for the welfare of men behind the gun and “to provide them the required equipment and weapons for performing their assigned roles”.

In the backdrop of global terrorism doctrined by Islamic Jihad and knocking on India’s doors, the government is working on a proposal to set up India’s first ‘Counter-Terrorism Academy‘ with an aim to redirect security establishment’s focus on training, research and forensics. The proposal is almost in the final shape.

“The proposal is in the works. The academy would have a training wing, a centre for excellence in forensics and a think tank which would focus on research in internal security issues. We have no credible think tank in the country that focuses on internal security,” said a senior home ministry official.

The move is part of government’s larger effort to recalibrate counter-terrorism efforts in the face of challenges from outfits such as al-Qaida and ISIS apart from ever metamorphosing domestic outfits such as Indian Mujahideen and SIMI.

Besides taking a stringent strategy to defuse the terror through Jehadi mayhem, Govt. of India has the eyes on sprouting communal riots and conflicts in different parts of the country, Muslim infiltration from neighbouring countries, Islamic banking and NGOs helping the Jihad in India in a very alarming way.

Govt. may a take a policy for compulsory military training and rendering some years in defense sectors for the citizen of India to build a strong nation against terrorism like Israel and some other developed countries.

Treating Muslims as their ‘vote bank’ and appeasements thereto has been grossly affected the Indian politics in the germination of  Islamic ghetto leading to Jihad as an worst side effect.

Experts and defense strategists in India are hopeful that the coming days under the prime-minister-ship of Narendra Modi will be an effective avenging turn to defuse the terrorists’ speed in India and Indian subcontinent. Designing a co-lateral strategy against terrorism in SAARC (South Asian Association for Regional Cooperation) countries may be a hard time for the Jihadi outfits in near future.

Final Jihad against India by the Talibans, Neo-Talibans like ISIS war groups or Ghazwa-e-Hind may be their Last Jihad for ever.

Courtesy: All links, source materials and pics used for the the above analysis.

2 comments on “India vows more pro-active preparedness to combat Jihadi terrorism in and out.”