AN OPEN LETTER TO THE PM MODI ABOUT THE DELHI DEFEAT & A UNITED HINDU ELECTORATE. 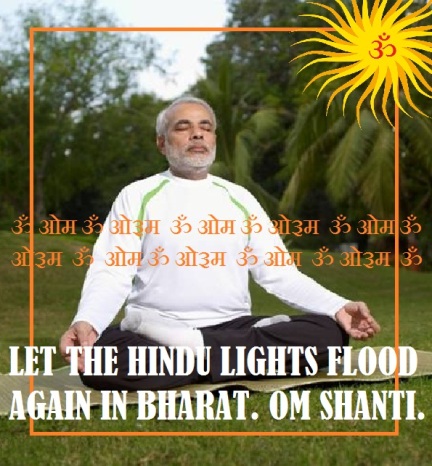 First let me tell you that many a times, I felt that some Divine Force was inspiring you – the way Sri Aurobindo said that Churchill was guided by Him to fight the Nazis…

But then, I have to say, as someone who travels extensively in India & has spent a lot of time in Delhi for the last 40 years (I have interviewed 7 Indian PM’s), that nothing much has changed. Your ministers are still as unreachable as the Congress ones, functioning in the same system with four layers of secretaries. Even if you have an important work – there is no way you can meet one of your ministers unless you have some pull. Your MP’s, as the Congress ones before them, once they come to Delhi, with their cars, bungalows, countless aides, and so many sycophants coming for favours, quickly lose sight of why they were elected. You need to send them BACK to their constituencies the way Mao Tse Tung sent back all his cadres to the countryside. Delhi is a microcosm of India and you seem to have lost there some of the Hindu electorate who voted for you UNITEDLY, from the Dalit to the businessmen. Some of us had seen this coming for a few months already.

You need to have around you people who will tell you what the mood of the people is – without ANY FEAR – for I have seen, even with gurus, that their followers always want to please them, flatter them and thus shield them from the truth. It is something inherent to the Hindu psyche. If this had been done, maybe we could have told you that the middle class and lower class Hindus who voted for you, want a change at the grass root level. They are not concerned about Obama and nuclear energy, or the way you are skillfully loosening the Chinese encircling grip, or the remarkable unifying of intelligence and their agencies you are doing with Mr Doval, but about the daily problems and the constant bribes that are asked by petty bureaucrats and policemen. I myself experience this in Maharashtra as I am asked bribes for getting permissions for a Museum, which is free, dedicated to Shivaji Maharaj and a sewa project!

Also they do not understand why you were so fiery and outspoken while campaigning – and now that you are elected, you do not seem any more to be promoting their Hindu causes. They cannot fathom, for instance in their simple minds, why you are being so friendly to Sonia Gandhi, who wanted you in prison or even dead – and why you are keeping away from those who supported you in your darkest hours, when nobody thought that you would become PM. These old friends of yours are still keeping quiet, out of respect for your work, but I know many who are bitter. The common Hindu man does not comprehend either why no one in your Government stands by reconversions of Christians or Muslims to Hinduism. During the last Tsunami, at least 10% of the Tamil Nadu fishermen were converted by Christian missionaries, using financial baits, such as free boats. I was there and SAW it. Or why when one of yours says that Hindus must produce more children, he is booed down. We know that Muslims produce seven to eight children per couple and in some areas of India they are now in majority and will NOT vote for you. It is true that there have been vandalizing of churches in Delhi, whether intentional, or just by some common thieves. But this is an old trick of Indian Christians to evoke sympathy from Obama and C° and bring pressure & discredit upon you. You should know better than that: Christians have been the aggressors in this country & the Pope still thinks that India is a fair target for mass conversions.

We understand that you must be the Prime Minister of all Indians and that you have to rise above sectarism, but there has to be in the public a perception that you are the PRIME MINISTER OF HINDUS BECAUSE IT IS THEY WHO VOTED FOR YOU – not the Muslims – whatever Ram Madhav told you before the Kashmir elections, which is going to be another thorn in your heel (and if you do not remove article 370 soon, most Hindus will lose faith in your government). To cultivate the Muslims, thinking that they will like you in the end, as Mr Vajpayee did, under the influence of the nice but misguided Suddeendhra Kulkarni, is not only a waste of time, but also may ALIENATE YOU HINDU VOTERS, whom you are going to need in four years again and at different state elections. Let the Muslims of India know that they possess the same rights as any Hindus, Sikhs or Christians, which they actually have, including total freedom of worship, that Hindus have neither in Bangladesh, Pakistan or Saudi Arabia, but do not go out of your way to please them. When the common man of Delhi sees that you received Aamir Khan, whose film PK, is a deliberate insult to all Hindu gurus & Hindus, they think something is not right. Also they do not understand why so many Hindu gurus and activists such as sadhvi Pragya and Colonel Purohit, whose innocence has been proved, are still languishing in jail. Congress had no qualms in favouring their people and flouting all decent rules. This isn’t about ethics, but if your aim is just, dharmic, and I believe it is, it does not matter what means are used.

The Congress got elected and elected again with mostly the Muslims votes, till Kejriwal came, You need to CULTIVATE THE HINDU ELECTORATE Sir, by making gestures, even if you let your people do them and stand back. And that has to be done QUICKLY. If they are convinced that you are working for them, you will have the two or even three terms you need to achieve a real Renaissance of India. Democracy is a beautiful but skewed system, easy to hijack by adharmic forces. To realise all the great things you have undertaken, YOU NEED A UNIFIED HINDU VOTE.

The trap now is to listen to the Media which says that your party lost in Delhi because of ‘communal’ reasons – vandalizing of churches, statements by your people about reconversions, or your so-called ten lakh suit. This will prod you and your government to go more secular, let go of more of the pledges you made for the Hindu cause during your campaign, the same way the Vajpayee Government veered away gradually from its Hindu ideals – and lost the elections to Sonia Gandhi.

But think of it like that: you got elected in May last year with a massive mandate BECAUSE of your dedicated, sincere and fiery HINDU promises. There is no reason why it should not work the same way now that you have the power. You need to stick by what your pledged Sir – whatever the Media, Obama, your bureaucrats or the Foreign Press says…

F Gautier is a Journalist and Writer of International repute, has the versatility in History, Society and Spirituality. Disciple of Sri Aurobindo and The Mother transformed himself as a loving son of Bharat Mata. Gautier is also very close to Sri Sri Ravi Shankar. Many of his unique creations, his books, Arise O India, Har anand, 2000; India’s Self Denial Auroville Press, 2001; Rewriting Indian History, India Research Press, 2003; and A New History of India, Har Anand, 2008. He is the founder of CHHATRAPATI SHIVAJI MAHARAJ MUSEUM OF INDIAN HISTORY at Pune (Maharashtra)- 411 047.