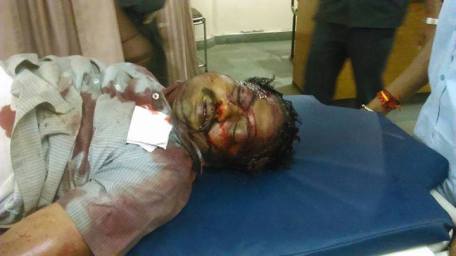 Upendra Bharti | HENB | Shimoga | 20 Feb 2015:: Communal violence broke out in Shivamogga (Shimoga), a district town in southern Indian State of Karnataka,  around 275 kms from Bengaluru, after three Hindu men on a bike were attacked by some Muslim people, allegedly by the supporter of Popular Front of India (a growing Islamic Political Party) on Thursday night.

As the report flashed in some reliable social network that Popular Front of India (PFI), a Muslim Fundamentalist Party originally based in Kerala (with links with SIMI and Pakistan’s ISI) organised a ‘Unity Rally’ at Shimoga on February 19th , 2015,

The main intention behind the rally is to unite Muslims  for justifying their demands for Muslim reservations in India. But, the rally was turned violent through sloganeering against Hindus and Pro-Hindutwa Organisations.

While the Procession passed through streets of Shimoga, stones were pelted at Hindu shops followed by Slogans of “PAKISTAN ZINDABAD”, ” WE WILL BUILD BABRI MASJID”, “DOWN DOWN RSS”, “DOWN DOWN BAJRANGDAL”, “DOWN DOWN NARENDRA MODI”  Even the slogans were heard in favour of ISIS and ISI. The slogans shouted with ulterior provocation caused the tension enough.

In the following communal tensions, A Hindu man Vishwanath, suspecting as a RSS (Rashtiya Swamsevak Sangha, a right wing Hindu organisation) supporter,  was hacked to death by Muslims and 2 Hindus are critically injured and shifted to specialty hospital. At least 10 other persons also injured in stone pelting and scuffles in the incident were treated locally. 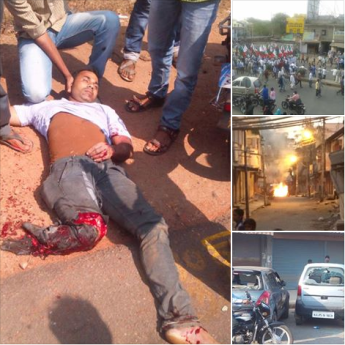 According to the police, “the three men who were riding the same bike, were allegedly stabbed by PFI activists. While the bike rider, Vishwanathan, died, the other two — his two pillion riders — received grave injuries. They injured have been shifted to Nanjappa hospital and have not been identified yet”.

The Bajrangdal – Kerala Facebook page narrates, “Today February 19, there was a ‘unity march’ organized by PFI in Shivamogga. They had a rally followed. In that rally they were shouting all anti Hindu and anti RSS slogans all along their rally and even in their function. After which they started pelting stones on Hindu youth, women in Shivappanayaka Market area and some shops in Gandhi Bazar.

They attacked RSS workers as well. Some of them are seriously injured. One person by name Vishvanath was coming from Gajanuru to Shimoga where he was attacked brutally, he is dead now in Shimoga’s hospital. Section 144 has been put up now.“

The police said that the assailants fled the scene and are still at large.

Two groups — RSS and PFI — clashed after some sloganeering against each other and violence erupted. Around 15 shops, houses and vehicles were burnt by the angry mob.

The police imposed Section 144 around 8.30 pm. Till the latest news, the police had asked the PFI activists, who had come from Mangaluru and Kerala, to return.

Police also resorted to lathicharge to disperse the mob near Shivappa circle. Six rounds of tear gas was also fired in the air by the police.

The administration has declared holiday in schools and colleges. The overall situation is highly tensed and very critical.