Shiva is Mahadev (Supreme God), not any messenger of God!

I am very much disgusted these days to see the attitude of many Hinduvadi activists as flashed in the advent of a statement passed by a Jamiat Mufti named Muhammad Ilyas. The statement is given on Hindu Dharma, Hindu Rashtravad (Nation-State), Hindu God Shiva is the first Prophet of Allah, all Muslims in India are also Hindu. and so on. In every point the Mufti is false and prompted by some cunning reasons. But, the most of the Hindus are forced to take the statement as great in a very motivated way and Baba Ramdev also supported the Mufti.

“All religions are preaching the same message. We are Indians first and our message is of peace, harmony and brotherhood. The way people in China are called Chinese and in Japan are called Japanese, similarly we are called Hindustani, all Muslims were the followers of Sanatan Dharma.” etc. etc. said Muhammad Ilyas.

The fact was that a delegation of Jamiat Ulema e Hind visited Ayodhya on 18th February to urge saints to participate in a conference on communal harmony under the banner of “National Komi Ekta Conference”  due on February 27 in Balrampur, Uttar Pradesh.

The main intention of this conference is to surface a ‘GOOD FACE’ of ‘UGLY ISLAM’ as the global pulse is going fast against the Radical Islam in the line of ISIS, Talibans, Boko Haram and so on. Jamiat Ulema has a plan to assemble Hinus saints and heads of all religious sects to pass a resolution in favour of ‘Islam is a Religion of Peace’, not appeared, now a days, as a ‘Religion of Piece’ or ‘Religion of Piss’. Mufti Ilyas just appeared in the field to recover the so called ‘peace and harmony’ level of Islam totally exposed.

Jamiat Ulema staged a rally in Ayodhya and also burnt the effigy of the terrorism to register their opposition. Muftis (clerics) also advised that everyone should  follow the path Sanatan Dharma, but never uttered any single word on Lord Rama in his very birth place, not even the construction of Rama Janmabhoomi Temple in Ayodhya. But, the net-savvy Hindus (lived on fb likes, share, re-twitts etc.), the media morons and the intellectual Hindus, jumped over Ilyas so that this Mufti must be recommended for Gyan Peeth award for his knowledge and articulation.

However, Jamiat Ulema’s Mufti Muhammad Ilyas was vehemently criticized by Muslim groups for saying Lord Shiva was Muslims’ first prophet and Shankar-Parvati as their parents and guardians too.

Mufti Mukarram Ahmed, Imam of Fatehpuri Masjid of Delhi, rejected Ilyas’s statements. “We do not accept what he said, it’s completely wrong according to Quranic dictum. Who ever posses a littlie knowledge on Islam will reject the version in question. It’s no where written in Quran. This could be his political statement,” Mukarram said.

Lucky enough that only two Hindu Organisations, Sanatan Santha (SS) and Hindu Janajagruti Samiti (HJS) has reacted sharply on derogatory statement of Mufti Ilyas. HJS website reflects that, “he (Mufti Muhammad Ilyas) has no knowledge of Hindu Dharma; therefore, such statement has been made out of his ignorance. It is necessary to get clarification on the same. As per Islam, ‘Khuda or Allah’ is God and Prophet means His messenger; but as per Hindu Dharma, Bhagavan Shiva is among the higher Deities. Shiva is God. There are different levels of Deities as ‘Parameshwar, Ishwar, Avatar and Dev’ and Saints are considered as their manifest form. As per Hindu Dharma, Ishwar Himself incarnates and does not send Prophets. Bhagavan Vishnu incarnated in the form of Shriram, Krushna etc. and has said in Bhagavad Gita that he would incarnate again and again. Mufti Mohammad Illiyas should understand this.

Mufti Mohammad Illiyas has stated that as a person staying in China is Chinese, in America is an American; so also every person staying in Hindustan is a Hindu and his statement is 100% true. Before 1400 years, there was not a single Muslim in the world; before 2100 years, there was no Christian in the world, 2800 years ago, there were no Buddhists or Jains and 3500 years ago,  no Parsee existed; then who were the people in the world at that time ?”

It is too much bogus that Ilyas claims, Islam was not created not from Mecca or Madina, not even just before some 1400 years back, Islam was also created as Sanatan (eternal)  Dharma!!!

If not hallucination in the part of Ilyas, not a intrigue or it is true revelation by the Mufti, he is most welcome to his origin and the issues of Gharwapi (homecoming) again on strike.

But, the matter is not easy as it is.  In every inch, the Mufti tried to strike the belief of Hindus only to make a gain in favour of Islamic expansionism.

When the Mufti tried most unreasonably to equate Lord Shiva, a Supreme God with a Messenger (actually a barbaric Arab stuffed with all fanaticism)  of Allah (a false God), at the same time he repeatedly told that, ‘ Hindu is not a Dharma at all and it is only a identity.’

Feel the conspiracy. The soda heads are generally  engrossed with all subtle things and do not grab this materiel one! When the exponents of Dharma like Sri Chaitanya, Samarth Ramadas, Sri Ramakrishna Paramhans, Swami Vivekananda, Swami Ramatirth, Sri Aurobindo, Dr Radhakrisnan all granted ‘Hindu Dharma’ as the eternal dharma of this holy land, this Ilyas just denies Hindu as Dharma. Why? If not wrong, it is an international conspiracy against Hindus to make them understand that there is no ‘Hindu Dharma’ as such and in this way the anti-Hindu conspirators want to remove the main force from Hindus to cripple and  defeat them for ever. If, there is no Hindu Dharma at all, it will be an easy task for these Muftis of  Jamiat Ulema e Hind and other Islamic forces to establish an Islamic State in India.

But, is the version of Mufti Ilyas on ‘We are all Hindstani, as the way people in China are called Chinese and in Japan are called Japanese’ really acceptable? 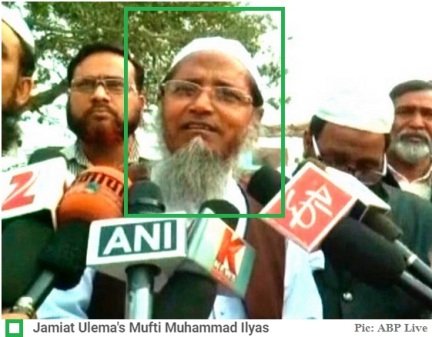 It sounds good.  But, the core of it is not so. Some easy interpreters wanted to highlight Mufti’s version close to the Rashtravad (Nation-State Theory) of RSS. But, definitely not. The Nationality concept of RSS is completely based on Cultural Unity and the age old Tradition of Bharat (India). Islam completely discards it as Islam divides humanity at its first thought as ‘believers (momin)’ and non-belivers (kaffir)’. More over Islamic history and tradition were just started some 1400 yrs back with robbery, conspiracy, treachery, war, horror, killing, iconoclasm, debauchery, sex slaves, sodomy all in the name of Islam, just unfit for any Indian context and conditions.

Then what is this Mufti telling about ‘We are all Hindstani’. Yes, this concept is wholly and fully related with the concept of Mohammad Iqbal, the preceptor of Pakistan. In Iqbal’s concept it was ‘Hindī  hain ham, watan hai Hindositān hamārā’, (ہندی ہیں ہم، وطن ہے ہندوستاں ہمارا) but in the realm of  Islamic invasion as it asked the flowing Ganges, Ai āb-i rūd-i Gangā! wuh din hain yād tujh ko? Utrā tire kināre jab kārwān hamara (O the flowing waters of the Ganges, do you remember that day When our caravan first disembarked on your waterfront?). The concept of Hindi hai hum actually reflect the meaning, Cīn o-ʿArab hamārā, Hindūstān hamārā/Muslim hain ham, wat̤an hai sārā jahan hamārā (Central Asia and Arabia are ours, Hindoostan is ours/We are Muslims, the whole world is our homeland). It is our ignorance that the writer of Tarānah-e-Hindī was completely exposed  as the writer of Tarānah-e-Milli. It goes like this.Cheen-o-Arab Humara, Hindustan Humara/ Muslim Hain Hum, Watan Hai Sara Jahan Humara/Touheed Ki Amanat Seenon Mein Hai Humare, Asan Nahin Nitana Naam-o-Nishan Humara/ Duniya Ke But-kadon Mein Pehlaa Wo Ghar Khudaa Ka, Ham Uske Paasbaan Hain, Wo Paasbaan Hamaaraa…….We are Muslims and the whole world is our homeland/The treasure of attributing Oneness is in our hearts,/It is not easy to wipe out our name and mark./The first house we have liberated from idols is the Ka’abah;/We are its custodians, and It is our protector/We have grown up in the shadows of swords,/Our mascot is the crescent shaped dagger/Our prayer calls have reverberated in the valleys of the west….. So, the hidden agenda of Islam, Iqbal and Ilyas are the same. We should be well aware of that.

Some days before some friends of Mufti Ilyas in Sunni Ulema Council threw six questions to RSS about Hindutva, Nationality, Hindu Rashtra, Hindu Constitution, position of Muslims in a Hindu state etc. RSS denied to answer it instantly but its expert in Islam and Muslim relations, Indresh Kumar intended to call a conference of Muslim organisations where he promised to answer the queries. But, we know very well that Indreshji will commit another blunder by doing something to humiliate the Rashtriye Avdharna (National Viewpoint) of millions of Hindus by forming something like  Muslim Rashtriya Manch instead of a Rashtriya Muslim Manch! I don’t know how and why the Muslim identity is more important to RSS than the Rashtriya (National) entity?

In one hand the Muslim communities in India support and rally for ISIS, radicalism in Islam and Jihad, on the other hand they apply the balm on Hindus by saying something about amity and fraternity. This double standard of Islam and Muslims must came to an end.

We, Hindus always believe in co-existence and acceptance. We don’t believe on mere conditional existence or crafted tolerance. Muslims and other non-Hindu populace in India are always safe and secured; prosperous and honored in this land. Also, we believe that the highest (in world population) Muslims in number can change the global scenario of the radical menace of Islam.

I have not any intention to hurt Mufti Ilyas or anybody  anyway. If it was some Hindu revelation to Mufti, certainly it was not a hoax.

But, I am still in dilemma, whether Mufti’s statement was  a revelation of truth or a pure Islamic hoax?

One comment on “Mufti Ilyas: Realization of Truth or Islamic hoax?”