HENB | Dhaka | May 23, 2015:: More than two and half months elapsed while police failed to rescue the Minority Hindu School girl – Ms. Shilpi Rani Das (15 yr 9 m) and the kidnapper – a Muslim School Teacher – Dost Mohammad Khan was not suspended from school at Barhatta Pilot Girls High School of Netrokona District nor arrested by the Islamic Police of Bangladesh so far . It is alleged that the victim was kidnapped from the way to her home from school on 4th March,2015. Victims’s father – Shri Nikhil Chandra Das lodged First information Report at Barhatta Police station case No.02 dated 07.03.2015 under section 7/30(1) of Women and Children Repression Act,2003 against the kidnapper School Teacher, but police neglected to rescue the girl nor the Officer-in-Charge of the respective police station took any initiative to arrest the kidnapper (married person with two children). The local rights group, political activists and Women rights group submitted a Memorandum to Upazila Nirbahi Officer on 18th March,15, but the local administration failed to take necessary steps for recovery of the victim girl.

The perpetrator Dost Mohammad Khan is a debauchee and dishonest person. Perpetrator managed to prepare a documents of conversion from Hinduism to Islam by Abdul Malik Shamim – Notary Public showing the age and culpably suppressing the date of birth of victim girl on 2nd April,2015.

In another case, Ms.Shymoli Rani Dey (16) adolescent Hindu girl was abducted on 17.04.2015 from Hajepur-Tilagaon UP within Kulaura Upazila of Moulvibazar District by 1) Rubel Meah (25) son of Barik Meah, 2) Zaglu Meah (23) son of Rois Meah 3) Barik Meah (50) and 4) Begum Bibi (45) wife of Rois Meah. Shymoli Rani was forcefully converted to Islam by swearing affidavit on 19.04.2015 and the actual name of the girl was changed to “SABINA AKHTAR” 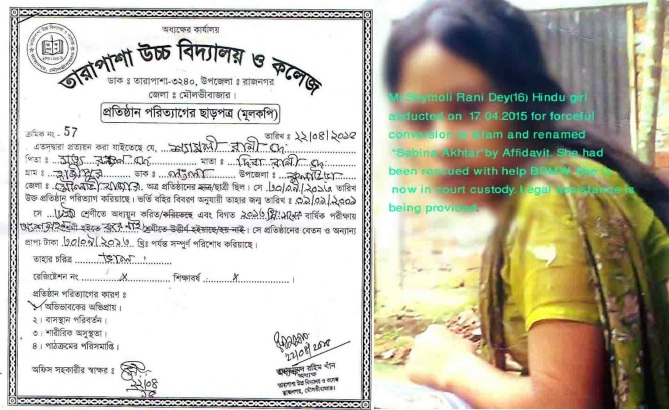 Satya Ranjan Dey- father of the victim girl filed a case before the Women and Children Repression Tribunal under section 7/30 of Act,2003 and Tribunal directed the O.C. Kulaura Police station to trace out victim. With the intervention of Bangladesh Minority Watch (BDMW), a rights group working in Bangladesh, police traced out the victim after a long gap and produced her before the Tribunal and the Tribunal sent the girl to Judicial custody recently on 21.05.2015.

While the father and daughter  were proceeding towards Lemua College riding on motor bike from their home to fill up the forms for Higher Secondary School Certificate Examination of Kona Rani on 14th March,15 at about 10.30 all on a sudden  three  Muslim motor bike riders (Mohammad Badal Howladar, Mohammad Rassel  and Mohammad Al-Ameen) intercepted the Motor Bike of Bikash Bepari  on the road from behind near Jugirhula area (beside cow firm of Seraj Master), 19 kilometres away from local police station. The Muslim bike riders dictated Bikash to get down from the motor bike but Bikash refused to get down from the bike, but  the Muslim bike riders created terror in the mind of Bikash and during the scuffle two perpetrators snatched away his daughter- Kona Rani  and fled away; other perpetrators started to beat Bikash till he became senseless. Some witnesses came forward but in the meantime those perpetrators with bike decamped and abducted the victim towards unknown destination.

After getting sense Bikash went to Patharghata police station and described the ordeal and lodged F.I.R. at Patharghata police station being case No.18 dated 15.03.15 under section 7/30 of Women and Children Repression Act,2003 against three perpetrators and 3 to 4 unknown others. With the rigorous effort of BDMW, Kona Rani was recovered after long 13 days. In the meantime Kona Rani had her evilest experiences with the beasts named Mohammad Badal, Mohammad Rassel and Mohammad Al-Ameen under their great Islamic identity.

Afterwards, Kona Rani Bepari, by an affidavit before the Notary Public at Dhaka, singed on 19.05.2015 pronounced punishment of perpetrators who kidnapped and abducted her for forceful conversion and marriage.  Fortunately, Kona Rani is now free from illegal custody of the perpetrators by the intervention of Court of Law and returned to her parental home after 1 month 9 days.

Though the international media had a little watch upon the gross humiliation of Minority Hindu and other non-Muslims in Bangladesh including dreadful violations upon the minority girls and women in Bangladesh, the Hindu Existence tries a little caring for it. Abduction to forceful conversion, molestation to rape, forceful marriage to murder all these are looming large to the frightened minorities of Bangladesh, as ruling party (Awami League) or the  opposition (BNP) are faithful to Islam not to Humanity.

At the night 15.05.2015 (FRIDAY), Ms.Shilpi Rani (18) adolescent Hindu College girl at Rameswar within Madhabpur Upazila of Hobigonj District was killed after rape.   Again, BDMW intervened into the case.   S.P. Hobigonj District  confirmed that one accused has been arrested in connection with the offence. The matter came to the the national Bengali daily “Janakantha” dated 18th May,2015, but the legal procedures go its own way in Bangladesh to uphold the decrees of Quran to punish the Kaffirs only. So majority Muslim people in Bangladesh just see all peace be upon Muhammad through snatching the peace from the minorities in Bangladesh. 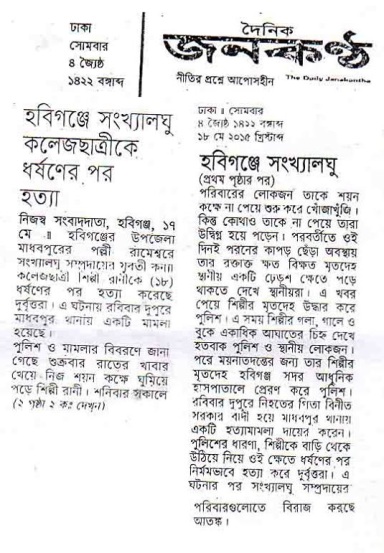 At the latest, five (suspected Muslims) rapists forcefully picked up a Garo (Indigenous) Minority Girl into Micro-Bus at and they raped her one after another in the running Micro on 21.05.2015 and fled away abandoning her on the street. The victim Ms.Susmita Thambu Gong (21 yrs), used to work in a shop at Jamuna Future Park at Gulshan-Dhaka as Salesman. On Thursday night while she was returning from her workplace towards her residence at about 10.00 p.m two perpetrators chased her and got her into Micro Bus and on running Bus she was repeatedly gang-raped by five unknown rapists. The permanent address of the victim is at Mymensingh-Fulbaria Upazilla. The victim lodged first information report (F.I.R) at Vaatara police station within Gulshan Division being case No.26 dated 22.05.2015 under section 7/9(3) of Women and Children Repression Act,2003 without naming any perpetrators. No rapists has yet been apprehended till writing of this report. The elder sister of the victim says although they are Garo (indigenous) but they believe in Christianity.

Hindu-Buddhist-Christian, nobody is spared in Bangladesh as they are minority Kaffir and majority Momins (Muslims)  in Bangladesh have their every rights to enjoy their Islamic life through  abduction, forceful conversion, marriage,  rape, eviction, torture, murder, ethnic cleansing, genocide of minorities which ever they may like in the name of Allah, Muhammad, Quran and Islam.

Shame on us, who likes big talk on Human and Minority Rights etc., but just see Bangladesh with closed eyes.

Thanks to Bangladesh Minority Watch, Bangladesh Hindu Buddhist Christians Unity Council, Bangladesh Hindu Mahajot etc. who are fighting for the Human and Minority Rights there until Bangladesh is declared as Hinduless. The present Islamic trend in Bangladesh has a definite sign of Hindu-Bouddha-Christian less with in 2030.

(With inputs from BDMW and Advocate Rabindranath Ghosh, Supreme Court of Bangladesh).