Communal tension tamed by police after clash between Hindu-Muslims in Pune. 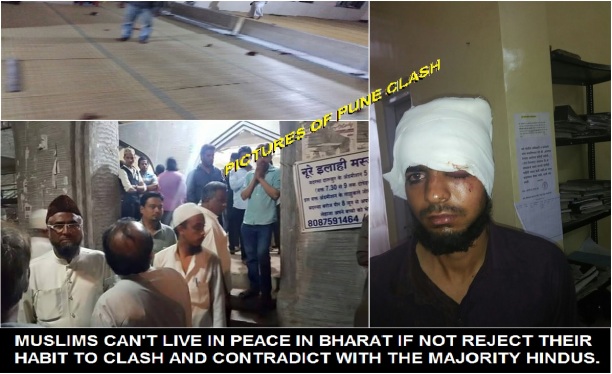 Halal Car Parking Zone! Kaffirs will not be allowed to park their vehicles at Mosque Sides!! 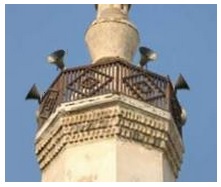 The Pune police have urged both groups to maintain peace. But, the communal calls honk…..

Milind Anand Patil | HENB | Pune | July 8, 2015::  The Pune police fired three rounds in the air and resorted to a mild lathi-charge to disperse two groups of people who clashed after attacking a Ganesh Temple and a local Shiva Sena Office in the late evening. Stones were thrown at a mosque at Parvati junction here later at night. Several persons were injured in the stone pelting, the police said. 11 persons were arrested by the police so far.

Eyewitnesses told the police that four or five people threw stones at the mosque around 10.30 pm when several people had gathered to offer Namaz. Trouble broke out soon after, and the attack was defended by the other group and its members took to the streets. Over a thousand people, representing both sides, started pelting stones at each other and damaged several vehicles passing through the area.

The scuffle started at around 10 pm on Tuesday with a group of Muslim youngsters allegedly troubled over headlights of a bike directly focused on their eyes. Seeing a huge Muslim gathering inside the Mosque, the Muslim juveniles trended the thrashing upon Hindu bike riders on post iftaar jolly. They beat the Hindu duo on the bike and went off the place and mixed with the post iftaar congregation in the nearby Noore-e-Ilahi mosque.  The injured Hindus  left soon to report to a nearby police station.

“In the meanwhile, a group gathered and pelted stones and bricks at the Noore-e-Ilahi mosque, about 100 metres from the spot,” Azhar Tamboli, an activist associated with Maharashtra Action Committee and AIMIM’s Pune district general secretary said. “The two groups clashed and people from the area got involved too. Two of their people were injured, while from our side 18 were injured. These included two women and children too,” reacted Tamboli in a despair of a defeat to the Hindu reaction.

It has been reported that the area of Noore-e-Ilahi mosque has been turned as a dane of AIMIM (All India Majlis-e-Ittehad-ul Muslimeen) and subversive elements in a camouflage of Maharashtra Action Committee. The notorious spot of German Bakery blast (13 February 2010) by Indian Mujaheddin is not far away from the area of present violence in Pune.

The source of Hindu Hitarakshak Varta narrated the present communal clash as a conspiracy made by the Muslim perpetrators to attack upon Hindus after post Iftaar namaz with swords, hockey sticks, iron rods etc. upon the local Hindu inhabitants. The communal Muslims attacked local Ganesh temple and Shiva Sena office as reported. Muslim perpetrators went on rampage over 1.30 hrs until the Hindus came forward to retaliate. The Muslim clashed with Hindus for a dispute over car parking. The clash started by Muslims at about 9.15 pm. As per report, Muslim perpetrators rampaged 50 vehicles in the disturbed areas.

In India, Muslims are making Halal zones near the Mosques and desperately trying to erase all business or habitation of Kaffirs (Hindus, Sikhs, Buddhists, Dalits, Christians and other non Muslims) near mosques, even car parking of Kaffirs near Mosques are now made the bone of contentions.

A police officer said the situation was tense till late in the Tuesday night. More than 800 police personnel were deployed in the area to avert any escalation of violence. Riot control vehicles were sent to the spot and all roads leading to the area were cordoned off.

On Wednesday, as a repercussion to instigation of communal violence by the Muslims under the mask of different organisation and political parties, the Pune Nagar Shiv Sena gathered in large numbers at a temple, barely 150 metres from the mosque. “Despite imposition of section 144 in place, police allowed them to gather and perform maha-aarti that too at the time of Iftaar,” alleged Sarfaraz Shaikh President AIMIM, Pune further and added: “We are more perplexed with the police role. Last night they were strict. What happened to them today? Their role is suspicious.”

Refuting all such allegations Police urged the public to keep peace and harmony and avoid any rumors. But, the communal calls honk them five times to clash with the Kaffirs.  DCP (Region- South, Zone-II) Pune Poilice,  Dr Sudhakar Pathare (L 020-26334249 / 26208387 and  M 9920197197 ) said they had arrested 11 persons from both the communities. He denied tension continued anymore. “There is no section 144, just that there is enough police deployment but the situation is normal,” he said.

Asked about the  maha-aarti was allowed when tension prevailed in the area, Pathare said, “It was not a maha aarti or anything. The temple has the evening aarti daily. Just that today more people gathered. But I repeat, the situation is normal.”

It could not be independently verified if indeed people from Shiv Sena were involved or not.

A huge reinforcement of police, comprising senior officers and personnel from the Dattawadi and adjoining police stations, the control room, striking force and the head quarters, was sent to the area to bring the situation under control.

Know more about Pune Communal Clash from this slot of Hindu Hitrakshak Varta.

2 comments on “Communal tension tamed by police after clash between Hindu-Muslims in Pune.”