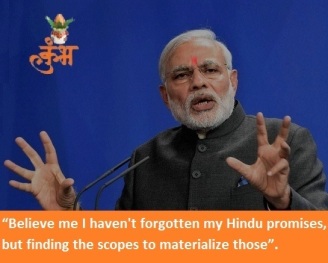 PTI | Dehradun | Sept 9, 2015:: Ahead of Prime Minister’s first visit to the state since assuming the top post last year, Congress today shot off a letter containing an eleven point charter of demands to Narendra Modi and accused him of “forgetting” the land from where river Ganga originates.

Uttarakhand Congress President Kishore Upadhyay today shot off a letter to the Prime Minister containing an eleven point charter of demands, including central funds worth Rs 17000 crore for reconstruction of chardham route, compensation to farmers for crops damaged by unseasonal rains and conducting Ardhakumbh mela next year.

He said that the demands which have long been pending before the Centre should be fulfilled during the Prime Minister’s forthcoming visit to Rishikesh on September 11.

While reminding him of his ‘Ganga chant’ while campaigning for the Lok Sabha polls last year, Upadhyay said the Prime Minister “appears to have forgotten the state where the Ganga originates”.

“You made tall promises to the people of Uttarakhand who believed in you and ensured the victory of all BJP candidates in the Lok Sabha polls. But you seem to have conveniently forgotten them after becoming Prime Minister,” Upadhyay said in his letter to Narendra Modi.

Listing out 11 demands of the state awaiting fulfilment, Upadhyay sought restoration of Rs 5000 crore curtailed from budgetary allocations to the state, Rs 15000 crore for carrying out infrastructural reconstruction in Kedarnath and route leading to chardhams, Rs 1000 crore each for the Ardhakumbh mela next year and to compensate farmers who lost their crops in unseasonal rains earlier this year.

Upadhyay also demanded a green bonus and an industrial package for the state besides revival of Central government undertakings located in Uttarakhand.

Seeking an appointment with the Prime Minister during his one-day visit, Upadhyay said it would be better if the demands are fulfilled now instead of during the run-up to Uttarakhand Assembly elections due in 2017.

The Prime Minister’s visit is primarily intended to meet Swami Dayanand Giri who has been indisposed for some time.

He will spend some time with Swami Dayanand Giri at his ashram in Sheeshamjhadi area of Rishikesh and leave for Chandigarh the same day.