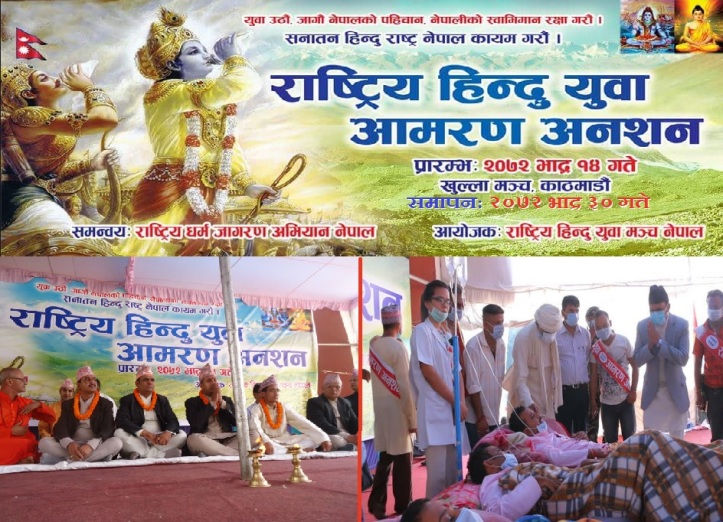 THT | Kathmandu | Sept 16, 2015:: Hindu protesters chased Law Minister Narahari Acharya away from Tundikhel area when he reached there to ask the youths on hunger strike to end their fast-unto-death on Wednesday afternoon.

The protesters at Khulamanch who had expected Prime Minister Sushil Koirala to arrive there started chanting slogans when they saw Minister Acharya and forced him to leave. Read details here.

HENB | New Delhi | Sept 16, 2015:: Four Hindu youths of Rashtriya Hindu Yuva Manch, Nepal,  have agreed to break the 17-day long ‘amran ansan’ (fast unto death) for the demand of Hindus Rashtra in Nepal with 9 points charter of demands, that started on 31 August.

Today around 4 pm,Nepal PM Koirala or His designated representative will come to Khula Manch to greet the four youths fasting for a cause of Hindu Rashtra and to break their fasting, as reports came in the Delhi Desk of HENB.

As per OnlineKhabar source, the office of PM Nepal agreed on seven demands and ought solutions together with the remaining two-on-demand, the PM of Sushil Koirala requested to break the fasting by the four brave Hindu youths at Khulamanch, Kathmandu Nepal. This has been conveyed by the wife of Sagar Katwal (one youth on fasting), Smt. Aarti Poudel Katwal to the OnlineKhabar Desk today.

On  16th days of Amaran Ansan, the health condition of 4 Hindu Youth fasting was worsening. Doctors are finding it difficult to give saline water, hands are painful and instead of saline water flowing into the body, blood is coming out towards the saline bottle. Even in such critical health situation, it seems that youths are ready to fight the battle and make Nepal as Hindu Rashtra. ”Jay Hindu Rashtra Nepal”  is coming out from their mouth, which exhibits their fighting spirit.

In the press conference at Khulamanch Amran Ansan venue on 15th September it was conveyed that “nationwide andolan are taking place for some time and also 4 Hindu youth are on amran ansan (fast unto death) with demand to declare Nepal as Hindu Rashtra.  But on 14 Sept 2015, in the constitution assembly (CA) has decided to make Nepal as secular nation. This denotes that peaceful andolan are not considered as andolan by the current Nepal government and political parties. Do they think that only shedding river of blood is considered as andolan ?

We are forced to consider that all the political leaders including all the councilor members are anti-nationals (Rastradrohi) who have made such suicidal decision for the Nation.

We request all Hindu brother and sister to stand up from wherever they are and contribute to protect Dharma and Nation. We express our gratitude to the media friend and all Hindus wishing good for the Nation. We hope to have your continuous support”.

Now, on 16th Sept, on behalf of Rashtriya Yuva Hindu Manch and Rashtriya Hindu Jagran Abhiyan, it is stated that ” As the Govt is agreed to take up our 7 points for positive consideration, we are giving three days ultimatum to take action and we are withdrawing our fasting unto death. Otherwise, a second phase of Nationwide Hindus Movement will come up with more strength that may be fatal for the political parties against Nepal’s Hindu culture and Heritage”.