Protest to attack on Seers and Saints…. 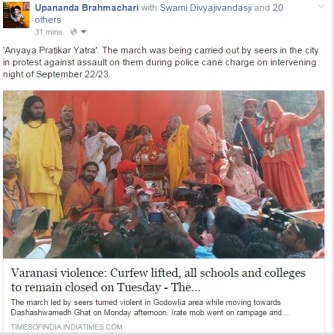 PTI | Varanasi | Oct 5, 2015:: Twelve people, including 8 policemen, were injured today in widespread violence and arson here during a procession by seers and other locals, prompting authorities to impose curfew for a few hours to control the situation.

29 people were arrested in connection with the incidents of stone-pelting and setting ablaze of a police booth, few shops as also a number of vehicles in this Lok Sabha constituency of Prime Minister Narendra Modi.

Additional forces were rushed here tonight as the situation remained tense. The administration ordered closure of schools and colleges tomorrow.

The violence broke out during a march by seers and some other locals, when some miscreants in the crowd resorted to stone-pelting at policemen, police sources said.

Read also: ‘Situation Turned Worse in Varanasi Due to UP Government’s Laxity’

Thousands of people, including seers, Congress MLA Ajay Rai along with some other leaders from his party and those from BJP took out the march from Townhall to Dashashwamedh Ghat to protest against the incident of lathicharge on them during their dharna staged between September 21 and 23.

The dharna had been staged for being prevented from immersing Ganesha idols in Ganga.

A few shops, a police booth and a number of vehicles were set ablaze by the mobs which also vandalised public property.

Police resorted to lathichage and tear gas shelling to disperse the mobs and bring the situation under control, the sources said.

Eight policemen and 4 others were injured in the violence, Kulhari said.

Curfew was imposed in various parts of Varanasi at around 4.30 pm to bring the situation under control and it was lifted after a few hours, the SSP said.

He said 29 people have been arrested and more arrests are expected after the video footage from media persons and CCTV cameras is examined.

Police also carried out a flag march in the affected areas.

The state government has taken incidents of vandalism, stone pelting and arson in Varanasi seriously, he said, adding the local administration has been directed to deal strongly with anarchist elements.

A government spokesman said that during the protest procession, the mobs pelted stones on police and indulged in arson which was effectively controlled by the district administration.

He said the situation was peaceful and under control.

District Magistrate Ram Mani Yadav announced that schools and colleges in Varanasi will be closed tomorrow in view of the incident.

The violence led to panic, with people, including domestic tourists, taking shelter even in public toilets and houses of local people.

Inspector General (Varanasi Zone) Amrender Singh Sengar, along with other senior officials rushed to the spot and are now monitoring the situation on the ground.

Courtesy: PTI and the links used above.