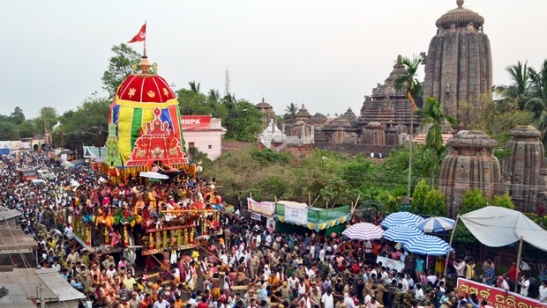 Express News Service | Bhubaneswar | April 15, 2016::Braving the sweltering heat, thousands turned out to pull Rukuna Rath of Lord Lingaraj in the City on Thursday. Though the chariot pulling started an hour and a half after the scheduled time, it went on smoothly without any trouble.

The chariot, however, made its halt for the day at Badheibanka Square as the sun went down at 6.20 pm. It will resume the journey at 4 pm on Friday. The three deities, who head to Rameswar Temple every year, would return after four days of rest.

Lord Chandrasekhar, the presiding deity, along with Rukmini and Basudev makes the annual journey on Ashokastami day.

The day began with the regular rituals and at 1.30 pm, the ‘Pahandi Bije’ started. At 3 pm, the Bhoga Mandap ‘niti’ of the deities took place with thousands gathering near the temple, a Shaiva peetha, to witness and take part in the chariot pulling.

While the entire day went off smoothly, the sevayats, police and temple officials saw through a bee attack when the ‘Pahandi’ rituals commenced. Servitors, executive officer of the temple Kelu Charan Ransingh and Lingaraj police station Inspector Janardan Padhi suffered stings but carried on the work.

The insects, which had a hive near Nita Thakurani temple near the northern gate of the temple, were probably set off by the sound of the cymbals and the bees swarmed the area.