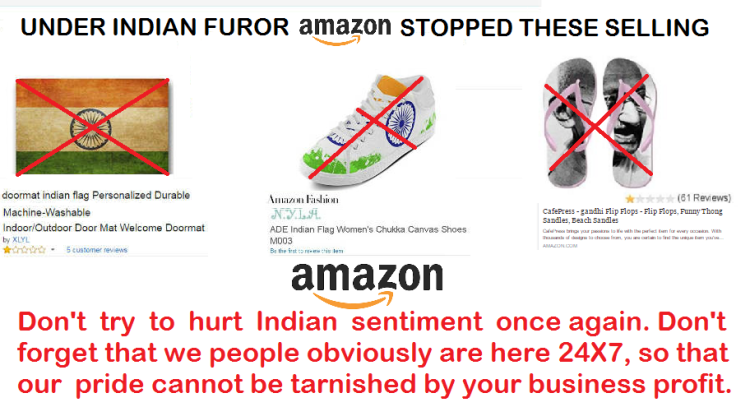 Upendra Bharti | HENB | New Delhi | Jan 15, 2017:: In the wake of ‘Indian flag doormat‘ being sold on Amazon and also selling of ‘Indian Flag canvas shoes‘ and casual foot wear ‘Gandhi Flip flop‘ chappals that raised a furore across the nation, the Indian government on Saturday called on the online shopping giant to respect Indian sentiments while providing a platform for third party vendors.

As a follow up to the matter regarding the sale of doormats with the Indian flag on Amazon, the Ministry of External Affairs (MEA) has instructed Indian Ambassador in Washington Navtej Sarna to convey to Amazon that while providing a platform for third-party vendors, they should respect Indian sensitivities and sentiments.

This is the second reprimand by the Indian government for Amazon who came under flak after images surfaced showing doormats with the Indian flag colours being sold on its website.

MEA spokesperson Vikas Swarup told ANI, “The External Affairs Minister immediately responded seeking an apology from Amazon and asking for offending item to be removed. Within one day, the vice-president and country head of Amazon wrote to er expressing regret and indicating that the item had been pulled from the website. We appreciate the prompt response from Amazon and hope that such incidents are not repeated in the future.”

Amazon had also apologised to External Affairs Minister Sushma Swaraj for hurting the patriotic sentiments of the people by selling a doormats printed with the Indian flag.

And finally the three highly objectionable goods those were hurting the sentiments of millions in Indian and India root people were removed by the e.retailer Amazon finally under Govt, intervention. But the public sentiments were grossly violated by Amazon undoubtedly.

Now people of India are saying proudly Jai Hind. Great Thanks to Sushma Swaraj, Ministry of External Affairs, Government of India, Amazon.com and Amazon India to remove Ind Flag Doormat, Ind Flag shoes and Gandhi chappals one by one We beg apology if any body hurted organisationally or individualy. We proclaim “NATION FIRST” as our PMO India- Narendra Modi says.

The Editor of Hindu Existence website and prominent Hindu advocacy leader Upananda Brahmachari  thanked all concerned whoever participated in this fight against a bare illogical and most irresponsible business of Amazon by hurting the sentiments of millions of Indians.

Two devout Hindu organisations viz. Hindu Janajagruti Samiti and Hindu Existence Forum have been fighting against such defamation of Indian pride and the dignity of Hindu deities for a long time continuously.

But, one thing which is still hurting the Indian point of sentiment that is another e.shopping mart CafePress is selling Pet apparel with Indian flags+. We are trying to contact both Indian Govt and the CafePress to remove Indian flag symbols from pet apparel etc.

This can’t be allowed. CafePress remove it immediately.

UPDATE ON 16.01.2017 AT 17.15 IST: The Cafepress authority communicated to our Moderator Rama Roy through Facebook in writing as, “We agree this is in poor taste and are in the process of removing the images from underwear, footwear, floor coverings, and pet items. If you ever have concerns about a design, you can DM us or email cup@cafepress.com.“

Now, it is clear that the e.shopping agaency ‘CafePress’ is aggreing with Indian sentiments and is likely to remove oblectionable items as Pet apparel etc. with Indian Flag and Map.

We convey our thanks to  Amazon, NYLA, CafePress and others  in advance to restrain themselves to hurt Indian and Hindu sentiments in any vulnerable way.

We have already tweeted and emailed this update to the concerned parties. Jai Hind and Namaste to all.