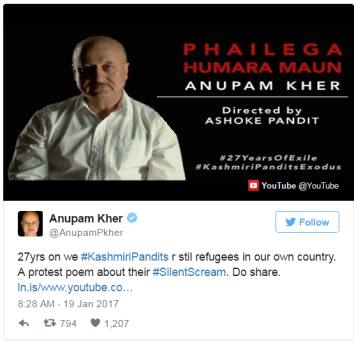 TNN | New Delhi | Jan 19, 2-017:: On the 27th anniversary of Pandits’ migration from the Kashmir valley due to escalating violence, noted Bollywood actor Anupam Kher Tuesday posted a poem dedicated to them.

He tweeted: “27yrs on we Kashmiri Pandits are still refugees in our own country. A protest poem about their Silent Scream. Do share.”

Kher, who’s a Kashmir Brahmin himself, says people have been suffering silence and he warned that “these voices will not be silent anymore”.

“Our silence will spread all over the world…just like salt in an ocean… Our silence will demand answer for the torcher we faced in our own homeland,” Kher recites in the video. The poem is written by Dr Sashi Shekhar Toshkani, a renowned Kashmiri poet.

“It’s been 27 years today. This exodus day is not celebrated, but remembered. It is an effort to make our voices reach to those ears who don’t want to hear this,” he added.

The same report says 209 Pandits were killed in the Valley between 1989 and 2004. However, several Pandit organisations put the number of those killed in the thousands. Until now, no one has been punished for the killings, say Pandit activists.

Kashmiri Pandits are a minority in the Muslim majority Valley. Many reportedly started being killed by militants in 1990, prompting fearful Pandits to migrate to the plains of the peaceful Jammu region of the state. Every day, dozens of Pandit families would pick up whatever little they could and cross the Banihal tunnel to reach Jammu, where they had to live in camps and tents and in inhuman conditions.