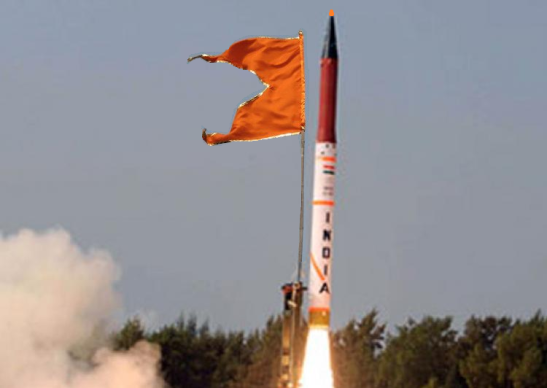 Shailaja Neelakantan| TNN | New Delhi | Apr 1, 2017:: Pakistan’s nuclear experts are worried, of course, about signals emerging from New Delhi that it might be reconsidering its ‘no first use’ of nukes policy.

They are, however, especially worried this change is “happening against the backdrop of (the) extremist Hindutva agenda of the Bharatiya Janata Party government”, said a retired Pakistani general still associated with Islamabad’s own nuclear strategy, Dawn reported today.

India’s rethink “is the latest in a series of provocative actions,” said retired general Ehsan ul Haq, a former chairman of Pakistan’s Joint Chiefs of Staff.

A Massachusetts Institute of Technology (MIT) expert of Indian origin was the first to flag a possible change in India’s thinking. That is, New Delhi moving away from its policy of ‘no first use’ (NFU) and carrying out a pre-emptive nuclear strike against Pakistan if it believed Pakistan was going to use nuclear weapons against it.

“India will not allow Pakistan to go first. And that India’s opening salvo may not be conventional strikes trying to pick off just Nasr batteries in the theatre,” Vipin Narang, a nuclear strategist from MIT, said at a seminar in Washington on Monday.

Narang’s recent comments have “only vindicated Pakistan’s position that India-declared NFU policy is a sham”, general Haq reportedly said, adding “he’s happy that the Indians are now themselves exposing their claims”, Dawn wrote.

India’s recent steps “from admission of interference in erstwhile East Pakistan to references to Balochistan and Gilgit-Baltistan, scuttling the Saarc summit, escalation along the Line of Control, claims of surgical strikes, diplomatic manoeuvring to isolate Pakistan and domestic war hysteria had heightened tensions between the two countries,” the retired Pakistani general added.

At the same time, Haq said India was “challenging the credibility of Pakistan’s nuclear deterrence through doctrinal as well as technological developments”.

Haq made these comments at the launch of a book, ‘Learning to Live with the Bomb, Pakistan: 1998-2016’, by Dr Naeem Salik, who’s a former official of the Strategic Plans Division.

“We have not only got to study our side of the game, we also have to watch out what is happening on the other side so that we learn from there also and adapt and reform own processes as well,” the author said.

One comment on “Pakistan only fears Hindutva compatible nukes.”