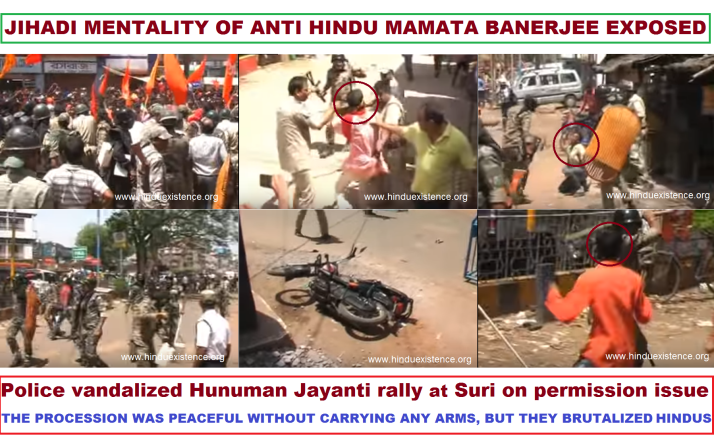 Upananda Brahmachari | HENB | Suri | April 11, 2017:: Being frightened with the upsurge of Hindutva line in Bengal, the fanatic Islamist and most anti Hindu CM of West Bengal issued a secret order to vandalize any Hindu procession in the name of Lord Rama and Hanuman by any RSS linked organisation in West Bengal, if the prior permission is not taken. But, she was totally unclear what would be done if the Muslims take out religious processions with arms or hold overnight Islamic functions without taking permission of the police!

But, police brutality upon the peaceful Hindu devotees participated in a Hanuman Jayanti rally in Suri showed the mindset of Mamata Banerjee without any cover.

Police resorted to lathi-charge when a large procession carrying banners, placards and saffron flags celebrating Hanuman Jayanti defied restriction and prohibitory order and almost laid siege the main bus stand at Suri in West Bengal’s Birbhum district today. The participant of the rally wanted the peaceful passage of the same. The participants did not carry any arms but their slogans like “Jay Shri Ram”, “Jai Bajrangi” etc. posed unbearable to the Jihadi Police of Mamata Banerjee.

The procession, mostly attended by the youths and teenagers, which had no legal permission, defied the police order and broke the iron-cage barricades at the bus stand promoted the law enforcing agency to use clubs to quell the mobs.RAF, Combat force and jawans of EFR, have been deployed to restore the situation after the police lathi-charge at around 10.00 hours.

As per the organisers of the Hanuman Jayanti procession, they had approached the district authorities and police seeking permission to take out a procession to mark the occasion but were repeatedly denied the same.

Left with no option, they took out a peaceful procession and police restored lathi-charge in a barbaric way. As per Zee News, many participants of the procession had injury on police assault, who were admitted into the local nursing homes and hospital.

Senior police and civil officials rushed to the spot to take stock of the situation.Police said the procession had not official sanction to take out rally on the streets.The procession, being organised by the Hindu Jagaran Manch (HJM), was carrying saffron flags, banners and shouted slogans of Hara Hara Mahadev to mark the Hanuman Jayanti.

Consequently, Anubrata was not ready to allow such Hanuman Jayanti Processions again in the Hanuman Jayati Day by the saffron brigade which is giving a obvious signal of increasing Hindu influence  against the pro-Muslim TMC control upon the Hindus  in Birbhum.

Experts say that today’s police attack on Hanuman Jayanti was an set piece move designed by Anubrata and Mamata linking Suri and Nabanna in the hotline. Police was used as a tool to brutalized the Hindus.

“We did not give them permission for any such rally in the area and asked them not to invite any political leaders. In spite of that, there was a rally. We did not initially object but had to intervene when they tried to enter the more sensitive areas of the town with a mixed population,” Birbhum’s Superintendent of Police N. Sudheer Kumar told IANS.

“Dilip Ghosh was supposed to attend this rally. He did not come himself but tried to incite the locals from Kolkata. These tactics won’t work in Birbhum,” Mondal said.

“Police had no objections initially but asked the rally n

ot to enter the Madrasa road. They did not listen to police. The rally was totally disorganised. I think what police has done is correct,” he added.

The organizers of Hanuman Jayanti submitted the procession route chart earlier but police told them nothing to change or modify it. All on on a sudden police tried to check the rally in Madrasa Road. Organizers argued with police that Muslims have permission to take out processions in Hindu areas, they erect Mosques in Hindu areas, sell beef near Hindu markets, then why Hindus are restricted to lead their procession just on road passing a mosque or Madrasa? Police brutality was the answer!

The uncut video of the police brutality on the Suri Hanuman Jayanti tagged with this report will speak how police worked to please their ‘Master in Suri’ and ‘Mistress in Nabanna’.