An open letter to PM Modi.

Attack immediately on Pak Army, ISI and BAT so that they never dare to attack on us. 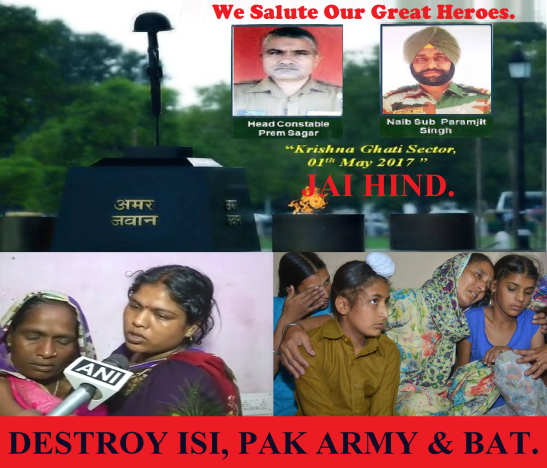 Namaskar. As far I know your psychological set up, you are passing sleepless nights after the horrific incidents in Krishna Ghati Sector on 1st May where the Pakistani Jihadis beheaded two of our soldiers on our land crossing the borders.

With this barbaric act of our so called neighbour Pakistan, the whole of Indian Nation stood in a row with the demand to take revenge with Pakistan. Defence experts also urged Govt. and the Indian Army is ready to take action against Pak+. But, after passing of 48 hours, we haven’t seen any virtual action against Pakistan as retaliation.

Very sorry to say PM Modiji, you rightly tweeted on 24 April on Maoist carnage in Chattishgarh as “We are proud of the valour of our @crpfindia personnel. The sacrifice of the martyrs will not go in vain. Condolences to their families”, but you forgot to tweet on Krishna Ghati attack on Indian Army and BSF soldiers, nor you express your condolence to the families of Martyr Parmajit Singh and Prem Sagar. This must hurt many like me as your concern for Krishna Ghati is not divulged yet.

Even I don’t know how will you react with the daughter of Martyr Prem Sagar, who wanted 50 Pakistani Army Heads as Revenge+ to her father’s brutal killing.

The Nation wants to know what is your reply to Lance Naik Hemraj’s mother who questioned you as, What about your fiery speech to bring 10 Pakistani heads against a head of our army+?

“Pakistan  beheaded  my  son  in  2013 and now we are witnessing numerous incidences every day. The government had promised that they will behead ten people if they beheaded one of ours, till now nothing has been done. The government should take stern action against Pakistan now,” Lance Naik Hemraj’s mother said.

As a projected PM Narendra Modi (in election campaign) and PMO India Modi (in Parliament), you many times rattled against Pakistan. But, showing a surgical strike in the dark, you are now accepting the Pakistan’s all perpetual perpetration in broad daylight.

PM Modi Ji, we are very much shocked with your Pakistan policy tagged with Jihadi terrorism in Kashmir valley and the pending rescue of POK as our virtual land.

You and your party claim, ‘BJP is a party with difference’! But, how do you still maintain Pakistan as a Most Favoured Nation (MFN) to India which was done by Congress, even after Krishna Ghati affairs. The Nation wants to know what is the mystery of relationship between Modi and Shariff, BJP and Pakistan? Stop all relations with Pakistan, crash MNF status given to Pakistan and cease all business deals with that land of brutality and insanity. (At this stage India must declare Israel as MNF). Destroy Pakistan economically.

While the whole Nation wants a revenge, Army is boiling to attack Pakistan, why PM is silent on this matter and perhaps experiencing an palpitation in his 56” chest. Please answer this point. Just lecturing on freeing Baluchistan  is not sufficient. Attack every dane of Masood Azhar, Hafiz Sayeed and Dawood Ibrahim and all the terrorist camps in POK and inside Pakistan. Break Pakistan forever and right now. Capture POK without delay.

I think you have completed your research on Pakistan and already prepared you next lecture with attractive phrases and idioms. But, Nation’s sake, please attack Pakistan at this proper time. Otherwise the souls of Saurav Kalia, Hemraj, Paramjit Singh, Prem Sagar and other martyrs will not get peace at all.

Families of soldiers mutilated by Pakistan demand payback now+, we the Indian citizens also. You can’t just bypass us. This is our humble submission.