‘Cow vigilantism’ is not a menace, but a demonized anti-Hindu propaganda. 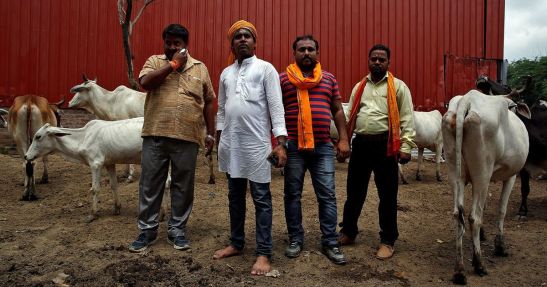 The danger of cow protectors is the latest in the strategy of targeting Hindu practices.

David Frawley | Daily O | New Delhi | May 4, 2017:: Over the past two years, the issues posed by cow vigilantism and cow protectors (gau rakshaks) has dominated the rhetoric of Opposition parties of India and formed one of their main electoral planks. They have raised a persistent cry of danger and oppression owing to violent cow protectors.

They have highlighted Hindu cow protection-based violence as massive and communal in nature, threatening the safety of all Muslims and perhaps all Dalits as well.

It is true there have been incidents of violence perpetrated by cow vigilantistes over the years that must be addressed. Violence against human beings in the name of protecting animals is not acceptable. But this issue should be understood in its correct proportions.

Without addressing the full scope of the issue, including cow smuggling and illegal slaughterhouses, which are profitable big businesses, to simply target cow protectors is politically motivated and misleading.

One must note that the issue of cow slaughter has been controversial for centuries in India, with its non-beef eating Hindu majority population. It was part of Mahatma Gandhi’s concerns who practiced cow protection himself.

This struggle over cow protectors, however unpleasant, is not a national security issue, like separatism and terrorism, with which it is often equated or even mentioned first along with. It is a law and order problem that should be addressed on that level.

Cow vigilantism is not a problem comparable to attacks by Pakistan-sponsored jihadis in Kashmir or Naxalite violence in the east of India that involve murdering soldiers and policemen. It does not merit front-page news or need to be repeatedly the subject of editorial and opinion pieces.

Such equations as gau rakshaks with the brutal behavior of the Islamic State, al-Qaeda or the Taliban – who regularly murder men, women and children in great numbers – are absurd. These statements remind us of Congress Party sponsored media efforts to highlight an alleged Hindu or Saffron terror and make it equivalent with Jihadi or Islamic terror.

The danger of cow protectors is the latest spin-off of this strategy of false equivalences targeting Hindu practices.

Unfortunately, cow vigilantism has becomean issue for the liberal Western media that has long been supportive of the Left in India and has served as their overseas voice, notably the New York Times, which bemoans cow violence in India as if it were a nationwide assault against Muslims who can no longer feel safe in their own country.

Read also:  Why Modi should be afraid of gau rakshaks

Act against Gau-Rakshaks doing violence, prepare their dossiers: UP DGP

Along with this cow protection outrage, some writers have called banning beef consumption a major violation of human rights. To have one’s eating of beef restricted or banned may be discomforting, but is not worse than a ban on alcohol, which is also occurring in Bihar.

Of course, the banning of cow protection finds support from the massive beef industry both in India and the West. Meanwhile the ecological dangers of a meat or beef diet that are well known are downplayed in the debate.

The Left’s shrill emphasis on the danger posed by cow protectors only shows they are intellectually bankrupt and have no positive agenda of their own. They want to colour India today as bleak and divided when in fact a new aspirational India is arising that is much happier with the development of the country under the BJP government.

Fortunately that new aspirational India is rejecting their worn out propaganda.

David Frawley (Acharya Vamdev Shashtri), D. Litt., is an American Hindu teacher and author, who has written more than thirty books on topics such as the Vedas, Hinduism, Yoga, Ayurveda and Vedic astrology. He is also the recipient of prestigious Padma Bhushan award from the government of India on 2015.