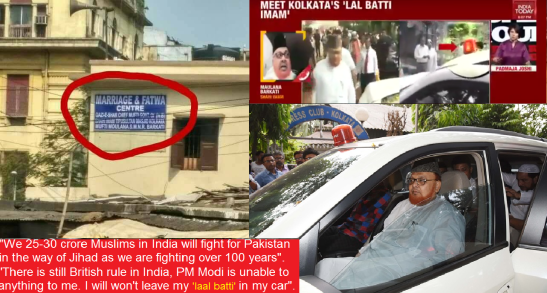 Upendra Bharti | HENB | Kolkata | May 10, 2017:: Fatwa Fanatic Kolkata Imam,  Syed Mohammed Nurur Rahman Barkati of Tipu Sultan Mosque issued another Fatwa from his “Marriage and Fatwa Center” that those Muslims who would support RSS and BJP would be expelled from the Muslim community. Barkati will take strict action against such RSS-BJP inclined Muslims+.

“As the Shahi Imam I declare that those Muslims who support RSS or BJP would be outcasted and if they try to put up a meeting or rally around this place I will beat them up myself,” Barkati said at a press conference on Tuesday.

He said that there were many Muslims who had been hugely bribed by the RSS and the BJP with lot of money to join in the right wing and to spark riots all over Bengal. “The Sangh Parivar is spreading its agenda of Hindutva across the country and just like there was jihad as seen in Afghanistan and all over the world, in India there will be jihad too if anybody try to make India into a Hindu Rashtra (nation),” Barkati said.

Criticizing the Central Govt’s initiatives to ban Triple Talaq, Cow slaughter and using Red lights in the cars, an irritated Barkati said, these practices have in force since British rules and there is no points to stop all these. Brakati claimed ‘his great grandfather was permitted to use read beacon in the car by first British Viceroy’.

Before accepting the question as the Calcutta High Court also denied to allow his red light in the car previously, Barkati advanced, “Does this Calcutta High Court belong to Govt. of India? It was built by the Britishers. It should be destroyed. We have not established it yet. We want to make a new for us”. Mocking the judiciary as such Barkati refuses to stop Red beacon from his car, saying, it’s British rule, even PM Modi can’t stop me.

Referring the strength of 25-30 crores of Muslims in India, Barkati showed his arrogance with the beef ban in some states in India, public displeasure of azan and govt’s interference in Muslim personal law. In this context, Barkati threatened to create another Pakistan or to join Pakistan echoing the Jihadi fanaticism.

Interestingly, coming straight to WB CM Mamata Banerjee, Barkati perhaps first time in these days, criticized her saying, “She is doing nothing. In her youth she ate Mutton (Khasi) Biriyani and everything (Beef?). Now, she only take Shasa & Muri  (cucumber and  puffed rice). But, how can we take it only?”

It is divulged in an interview with Barkati taken by India today, Barkati clearly said, WB CM told him to use red beacon as usual+.  This Imam Brakati runs a ‘Marriage and Fatwa Center’ in his house under the indulgence of Mamata Banerjee. 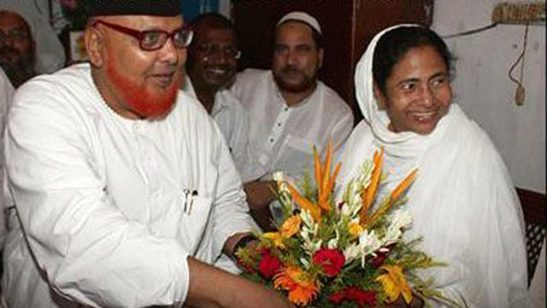 The TMC stalwarts like Partha Chattopadhyay, Madan Mitra, Shovan Chatterjee, Firhad Hakim, Subrato Chattopadhyay all are silent in an overcast about such mockery on Mamata by Barkati.

In Bengal, Muslim League was established in 1905 that led a creation of Pakistan dividing India in 1947. Now many in TMC, including Barkati, are reclaiming the same fundamental and anti-national situations, considering TMC as Total Muslim Congress and not as Trinmool Congress.

As Mamata Banerjee took out all these Jihadi Ghosts out of her Ma-Mati-Manush bottle for her vote bank politics, it is now very much difficult for her to seal them again until that bottle is made only for Madrasa-Masjid and Musalman.

Legal experts say, Barkati must be taken into custody under Section 295A [Deliberate and malicious acts, intended to outrage religious feelings of any class by insulting its religion or religious beliefs]; Section 121 [Waging, or attempting to wage war, or abetting waging of war, against the Government of India]; 124A. [Sedition]; 195A. [Threatening any person to give false evidence] of Indian Penal Code with other attracted sections reflected in this report.

__Agencies. Courtesy to the pics, links and video footage used above.

One comment on “Kolkata Imam Barkati declares Jihad against India to create Pakistan, denies to put off read beacon.”