Muslim Hekim arrested for raping Hindu woman for three months over treatment of her ailing son. 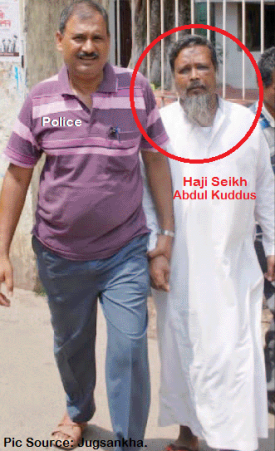 Upendra Bharti  | HENB | Uluberia | May 21, 2017:: A Hekimi (traditional Islamic medicine school)  practitioner, who had allegedly been raping a Hindu woman for about three months in lieu of her kid’s treatment, has been arrested by Howarh police on Saturday . The accused, Haji Seikh Abdul Kuddus, has been slapped with charges that include rape [Sec 376]  and criminal intimidation [Sec 596] under IPC.

The 27-year-old Hindu woman Sanjita Parui (name changed) and her husband Sahadev (name changed) had been running from the pillar to post for the treatment of their only son, a six-year-old boy who is suffering from leukemia. Her husband works as a daily laborer at a factory in Kolkata. The duo had already spent their savings on the boy’s treatment without any significant improvement.

Around four months ago, their neighbor in Howrah’s Joypur area asked them to take the boy to the Muslim Hekim practitioner who had “miracle potions” and ‘Pak Tabiz’ (holy amulet) for different ailment.

At first Kuddus gave an Islamic amulet at a cost of Rs 4,500/- (appx 70 US $) for the treatment of the boy, but it did not work at all. Then, Kuddus kept a condition that shocked her. “Kuddus Hekim assured me that he would cure my son in six months. But, he told me that he could waive the fees if I agreed to have sex with him for the next six months,” the woman alleged in her FIR.

Worried about their son’s pale condition, the couple knocked on the doors of the Muslim practitioner who runs a miracle Islamic treatment center (Kudrati Dwakhana) in Sehagarhi, off National Highway 6. “Kuddus Hekim in his fifty five age said he would cure my son with some Arabic herbs that would cost Rs 5 to 6 lakh,” said the woman’s husband. When the couple pleaded to make the treatment affordable, Kuddus asked them to visit another day .

With no idea about his sinister motive, the woman went alone to his chamber. As she reportedly agreed, two times Haji (who goes to Mecca and Madina for highest Islamic pilgrimage)  Kuddus had his way of ‘Halal Rape‘ for the past three months, taking advantage of the woman’s helplessness. Kuddus exploited her at his chamber whenever she would go there with her son for treatment.

In the meanwhile, Kuddus frightened Saniita telling her about an irrecoverable loss as her Husband would die due to frustration out of son’s illness and both her son and husband were the victim of Jinn (Islamic unholy spirit). For getting out of the situation Kuddus suggested more sex with pious Muslim men to please them secretly in his chamber.

But things turned worse on Saturday, as Kuddus asked Sanjita to entertain more pious Muslim men, saying some of his friends were turning up at his chamber. When the woman refused, the accused Kuddus allegedly assaulted her and his friends molested Sanjita putting their holy hands of Momins in a Kafir woman’s private parts. A mentally and physically tortured Sanjita returned her home at Bhateghari village anyway.

Hearing the woman’s cry for help and seeing a critical condition of the victim, neighbors and  locals of Bhateghari gathered and reached Sehagarhi, beat up Kuddus inside his ‘Kudrati Dwakhana’ Medical center and called the police of Joypur PS [Ph 03214-234126]. Police arrested Kuddus on the basis of circumstantial evidences.

Two times Haji, five times everyday namazi, occult master, Hekim Abduk Kuddus is now in Jail for a rape charge of a mother who sought treatment for her ailing son in a dire poverty stricken condition.

Snajita’s case is not a singularized case in Bengal or India, thousands of Hindu girls and women (also Muslim women and girls)  are being victims of Islamic occult treatments like ‘miracle  potions’, ‘holy amulets’ and ‘steroid mixed Hekimi medicines’ every time all round.

One comment on “Muslim Hekim arrested for raping Hindu woman for three months over treatment of her ailing son.”