Death of Hindu woman 4 weeks after eloping with married Muslim man in Lucknow. 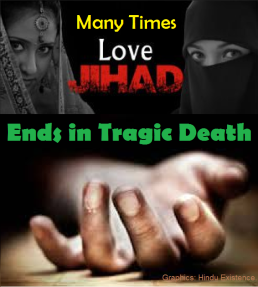 HT Media | Lucknow | May 25, 2017:: An 18-year-old Hindu woman died on Tuesday night, nearly three weeks after she eloped with a married Muslim man who had three kids, from Hussainganj here. While the police said she died as a result of severe infection (septicaemia) caused due to excessive consumption of some medicines, her family has alleged foul play.

The victim, Archana, went missing from her house on the afternoon of May 1 when she left for the market. Her father Ishwari Lal kept searching for her for the next few days before finally lodging an FIR against one Javed with the Hussainganj police on May 12. The accused was charged under section 366 (kidnapping a girl for marriage) of the Indian Penal Code.

He was arrested after the woman’s death.

Sub-inspector (S-I) Vaibhav Kumar Singh, the investigation officer in the case, said the victim’s family and the police had been searching for her and Javed for the past ten days but with no results.

“Her family came to know about her death when an unknown caller informed her father that she had died during treatment at KGMU trauma centre. The woman’s father said he was told that his daughter was under treatment for the past one week. Earlier, she was admitted to the civil hospital on Park road and then referred to the trauma centre on Tuesday when her condition deteriorated,” he said.

The woman’s father has alleged that Javed made her consume some medicines that caused the infection and has demanded a detailed probe in the matter. The body was sent for post-mortem examination after the family’s allegation and the findings of the report suggest the victim died due to severe infection.

The S-I said, “Javed has been arrested following the previous (kidnapping) case lodged against him. He will be quizzed further over the family’s allegations. Further action will be initiated and IPC sections will be altered if we find substantial evidences of foul play in the woman’s death.”

The complainant had earlier accused Javed, a resident of a slum alongside Kurkrail Naala in Purana Qila, of taking his daughter away after developing intimate relations with her. He said he was shocked when he reached Javed’s house searching for his daughter. “Javed is already married and has three kids. His wife said he has been missing since May 1, the day when my daughter disappeared,” said the victim’s father.

For any query with respect to this article or any other content requirement, please contact Editor at htsyndication@hindustantimes.com

One comment on “Death of Hindu woman 4 weeks after eloping with married Muslim man in Lucknow.”