Upendra Bharti | HENB | Kolkata | July 4, 2017:: It’s only two and half hours journey from the Nabanna, the WB State Adminitrative HQ to reach Baduria under Basirhat subdivision in North 24 Pgs. Baduria is in  the spate of communal fire on ‘objectionable’ facebook posting from yesterday. Rath Yatra was halted. Hindus were attacked by Jihadi groups. Baduria police station was in a situation under the attack of fiery Muslim mob. But, present day Nero of West Bengal, i.e. State Chief Minister was playing her violin for a harmony number!

From social media inputs it is derived that angry Muslim mob came out in the streets of Rudrapur and adjucent areas to protest on an objectionable facebook posting which claimed that ‘Kaba was a ancient Shiva Temple’. The shared picture of ‘Kaba as an ancient Shiva Temple’ is widely available in google search+ and nothing new. But, Jihadi Muslims in Bengal gets the matter as a tool of spreading a communal flair up.

One Saurav Sarkar, a student of class XII standard uploaded the objectionable posting in the facebook. On complaint Police immediately arrested Sourav, but the Jihadi dance of the Mumin brothers could not be prevented anyway.

ALL FROM GOOGLE SEARCH. BUT SHARING IS A MATTER OF MUSLIM RIOT.

The tension rapidly aggravated in Keosha market, Banshtala, Ramchandrapur, Tentulia and Gokulpur. In the Muslim dominated area of Bashirhat subdivision, it was not any difficulty to attack Hindus on any created issue. Hindu property, temples, shops were attacked by extremist Muslims at Baduria.

More than 35 persons were injured by the Jihadi attackers, six of them are believed in a critical condition and being treated in Barasat Hospital, as reports came in.

As per Kolkata 24X7 media reports+, the administration is contemplating precautionary deployment of Army to control the situation.

Update on 04/07/2017 (3.30 pm):: The PTI sources said that three companies (about 300 personnel) of paramilitary forces were being rushed to the state to assist the local police in containing the situation.

Update on 04/07/2017 (5.35 pm):: WB CM Mamata Banerjee thought to resign+ as WB Govorner K N Tripathi cautioned her for Baduria Riot. Mamata claimed that WB Governor humiliated her taking the side of BJP. She also showed her annoyance to Muslim community for flairing up the communal tension at baduria on a petty facebook posting. See this video here. (Source: News 18 Bengali). 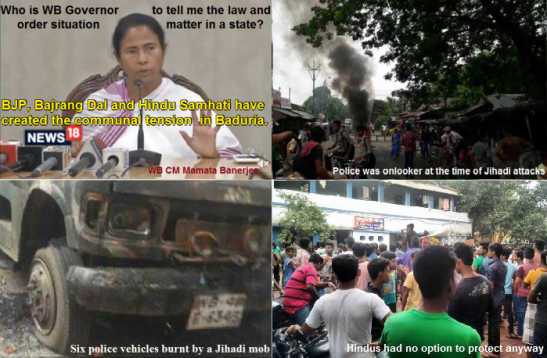 Update on 04/07/2017 (6.00 pm):: The shameless WB CM Mamata Banerjee told the reporters in Nabanna (the State Admin HQ) that BJP was behind the Baduria Riot. She also condemned the role of Bajrang Dal and Hindu Samhati for Baduria Riot. But, she never mentioned her Jihadi brothers as the culprits for Baduria Riot. (Source: Sambad Pratidin+).

Update on 04/07/2017 (6.50 pm):: Meanwhile, the BJP alleged that over 2000 Muslims attacked Hindu families in the North 24 Parganas district of West Bengal and its offices at several places were set on fire. Accusing the state police of failing to control the situation, party general secretary Kailash Vijayvargiya, who is also in charge of the state, urged Home Minister Rajnath Singh to intervene in the matter. (Source: Indian Express+).