Fresh communal clashes in Uttar Pradesh leave many hurt in Durga Puja and Muharram processions. More than half a dozen people from both sides were injured and have been hospitalised. 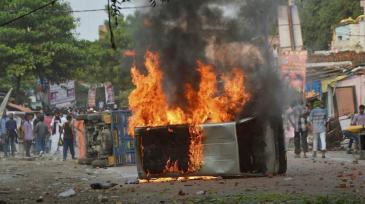 Vehicles set on fire after a clash between Hindu and Muslims during a Muharram procession at Parampurva in Kanpur. (Photo: PTI)

Amit Verma | AA Online | Lucknow | Oct 2, 2107::  Communal clashes took place in Kanpur, Kaushambhi and Ballia during the past 24 hours. All the incidents are related to Moharram and Durga Puja processions.

In Kanpur, two communities clashed over the route of a Tazia procession and the police had to resort to a lathicharge to disperse the mob. Nearly half a dozen vehicles were set on fire and police outposts in Kalyanpur and Juhi localities were vandalised. Senior police officials rushed to the riot-hit areas and additional companies of RAF have been deployed.

In Kaushambhi, an altercation between those taking the Durga idol for immersion and those taking the Tazia on Moharram took place and youngsters belonging to a community entered the house of a member of the other community and stabbed a brother and sister inside the house.

Additional security has been deployed in Manjhanpur area where the incident took place in the early hours of Sunday.

In Ballia district, a small dispute in the processions between children took an ugly turn when the elders of two communities joined in and provoked a violent clash. The incident took place on Saturday night in Sikandarpur area in Ballia district at a Durga Puja fair.

More than half a dozen people from both sides were injured and have been hospitalised. No case has yet been registered by the warring groups. The matter was later resolved by the officials.

District magistrate Surendra Vikram said that the children’s dispute was given a communal colour when the elders joined in and carried forward the argument.

“The quarrel which took place involving children of two communities at a Durga Puja fair led to tension and people from the two communities cla-shed with each other. Th-ere were reports of stone pelting also” he said.

Meanwhile, in Pratapgarh, Raja Uday Pratap Singh, father of former UP minister Raja Bhaiyya, was placed under house arrest insisted on hosting a communal feast (“bhandara”) in Sheikhpur village. Since the event was to be held on Sunday which coincided with Moharram, the district magistrate Shambhu Kumar cancelled the permission.

Since Mr Raja Uday Pratap Singh announced that he would hold the feast even without permission, the district administration put him under house arrest. He will remain bound to his house till late on Sunday night. Interestingly, the event was being supported by the Vishwa Hindu Parishad.

Debashish Karmakar and Kashi Prasad | TNN | Patna and Munger | Oct 2, 2017::  Tension prevailed in Jamui town after a nine-year-old boy from a majority community was injured in stone pelting when an idol immersion procession was taken out on Saturday. In retaliation, members of majority community attacked a Muharram procession in Masaurhi Chowk locality of the town on Sunday. The district administration has put idol immersion and Muharram processions on hold in the town following the twin clashes.

Jamui SDPO Nisar Ahmed said trouble started when some anti-social elements pelted those participating in two idol immersion processions with stones in Khaira Mor and Masaurhi Chowk areas of the town on Saturday. “The stones were being pelted from terraces of some houses. A nine-year-old boy was injured in stone pelting at Khaira Mor,” the SDPO said, adding Sashastra Seema Bal and Special Task Force personnel have been deployed in the town to avoid any untoward incident.

The SDPO said district magistrate Kaushal Kishore and superintendent of police Jayant Kant are camping in the town to bring the situation under control. “The situation is tense but under control,” the SDPO said, adding no FIR has so far been lodged in connection with the two clashes.

In another incident, a Muharram procession was allegedly attacked at Baruraj in Muzaffarpur district on Sunday. SHO of Baruraj police station Pramod Kumar said members of the minority community were pelted with stones. “Security has been tightened in the area in view of the clash,” the SHO added.