Muslim Husband enforced wife to be raped by his father-brother-friends. Tortured wife returned to Hindu faith. 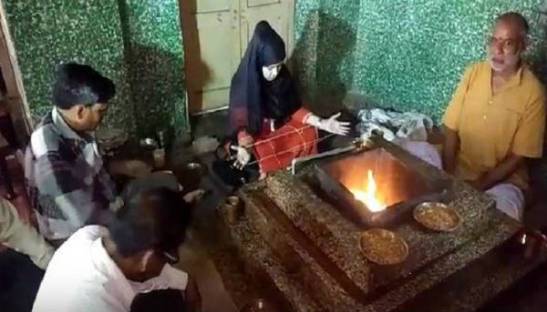 Come back to Home again. Welcome to Hindu faith.

Converted to Islam for marriage in tender age. Muslim Husband enforced wife to be raped by his father-brother-friends…

Victim of Love jihad, also a mother of 2 returns to Hindu Dharma finally.

Upendra Bharti | HENB | Aligarh (UP) | June 12, 2018:: A mother of two has finally returned to Hindu Dharma in a Ghar Wapsi (Come to Home – reconversion) program organized by Hindu Mahasabha at the Arya Samaj mandir in Aligarh’s Achal Taal – Civil line areas, Hindi news outlet UP Samachar has reported+. The Hindu woman had married a jihadi man Yusuf Shoaib, who had introduced himself as a Hindu named Kabir Chauhan, ten years ago.

The woman realized her husband was Muslim after she arrived at her in-laws place. At the time, she had consigned herself to her fate and continued with the marriage. But soon she began to be ill-treated. Her father-in-law and brother-in-law started eyeing her with wrong intentions.

As per Bengali news portal Zee-24 Ghanta+, Yusuf utilized her wife to earn money through illegal prostitution within his family and friends. Even he used to enforce her wife to be raped by her father-in-law and brother-in-laws on regular basis. It is known from another source that the victim was minor  when she was married.

The victim girl complained to police that she was being raped by her husband’s friends in lieu of a payment of 200 INR (3 US $ appx). But, police did not arrest anybody so far upon victim’s complaint, so far.

Akhil Bharat Hindu Mahasabha’s Ashok Pandey says that Hindu girls are trapped in such incidents of Love Jihad in many places in Uttar Pradesh, specially in Muslim majority areas and are married through deceit and forced conversion. Then their torture & exploitation starts. Few days ago,  we have done Ghar Wapsi of one such girl.

Source: UP Samachar and Zee 24 Ghanta.