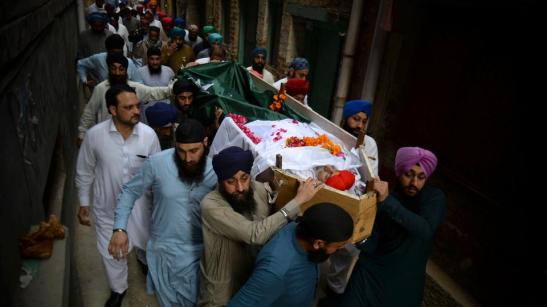 People carry the body of Charanjeet Singh who was a well-known member of the country’s minority Sikh community, a human rights activist and an outspoken critic of the Taliban, during his funeral, in Peshawar, Pakistan, Wednesday, May 30, 2018.

Plights of Peshawar Sikhs have no limit….

Sikhs in Peshawar flee after attacks by Islamic fundamentalists in Pakistan.

Navjot Singh Sandhu | HENB | New Delhi | June 14, 2018::  Plights of Peshawar Sikhs have no limit as they have been attacked by fundamental Islamic fanatics in Pakistan since years back.  While many outfits belonging to pseudo Akali and hard-liners Khalistani are keeping close connection with many Islamist groups in Pakistan and run their propaganda against India and Hindus, those organisations maintain silence on the brutal attacks on Sikh people in Pakistan’s Peshawar. Peshawar is the capital of Pakistani province Khyber Pakhtunkhwa, but the entire region is commonly known as Peshawar.

Afraid of targeted killings, Sikh families from Peshawar city of Khyber Pakhtunkhwa (KPK) province of Pakistan are fleeing to safety days after killing of members of Sikh community including a local Sikh religious leader in recent time . As matter of fact, Pakistan’s minority Sikh community is dispersing to other parts of the country from Peshawar after repeated attacks by Islamic fundamentalists.

Peshawar has a population of about 30,000 Sikhs, out of which, 60 per cent has left for other parts of Pakistan to avoid living under a constant threat.

This gravity comes after, Charanjeet Singh, a peace activist and grocery store owner was shot by a customer in Pakistan. Charanjeet was killed for not attending to the customer as he was busy. He died on his way to the hospital, a report by TRT world said.

Baba Gurpal Singh, a spokesperson from the Sikh community told a media outlet, “I believe genocide of Sikhs is taking place here.”

Few people from the community are also blaming Talibani extremists for carrying out routine killings.

Few Sikhs living in Peshawar are resorting to cutting hair to conceal their identities, ANI reported.

Another issue that came to light is the absence of crematorium grounds.

Although Khyber Pakhtunkhwa government had allocated money for crematorium last year, no construction was carried out.

The lands to build crematorium have been given over to build a private bank, wedding hall, and a company.

The local media in Pakistan also reported that the government of Pakistan is not concerned about the security and protection of the Sikhs in the Muslim majority country.

History tells that Hindus and Sikhs of Punjab were the victims in Islamic rule in undivided India, more specifically in Mughal period.   Many of Sikh Gurus were brutalized and killed by the Mughal rulers and Sikh people also fought against them to save their own prestige of Dharma and society.

The grown up anti-Sikh mentality in Islam still persists in Pakistan and fundamental Islamic outfits run their attacks and assassinations over the Sikh Community as per Jihadi agenda. Hindus of Pakistan are not the exception of that Islamic onslaught against the non-Muslims, the ‘Kafirs’.

Hindu and Sikh minorities in Pakistan are two vanishing communities under the barbarity in Islam.

Sikh Protest against Persecution in Pakistan.

Some Sikh groups have also demonstrated+ against the Islamic attacks on them in Khyber Pakhtunkhwa including religious persecution, murder, kidnapping, extrusion etc+.

But, Indian Govt and Media have least concern about the plights of Hindus and Sikhs in Pakistan under the growing Islamic fanaticism there.

Upananda Brahmachari, Editor in Chief, Hindu Existence Website,  Reputed Hindu Interlocutor and Expert on Pakistan Affairs, told HENB that Pakistan has the nefarious design to eliminate the Hindu-Sikh-Christian-Kadiyani minorities from Pakistani demography withing 2025. But, it is unfortunate that Govt of India is not playing its prominent role to protect the minority rights of a neighboring country, when most of minorities in Pak are of Indian roots.