Pakistan is playing with the fire of Khalistani Terrorism prompted by its Jihadi counterparts…..

The Bisaria couple and Indian officials were forced to return from the shrine despite having obtained all necessary permissions for the visit in advance from Pakistan’s foreign ministry. This is the second time Indian officials have been prevented from meeting pilgrims from India, the last being on April 14. Pakistan’s deputy high commissioner Syed Haider Shah was summoned by the Indian foreign ministry to register a protest and India also warned Islamabad against fanning the Khalistan secessionist movement.

As on April 14, when Indian pilgrims were visiting for Baisakhi, India said its officials had been prevented from carrying out their consular duties. According to Indian officials, Pakistan prevents such meetings to allow its agencies the opportunity to try and brainwash pilgrims into supporting the Khalistan movement.

On the previous occasion, a woman had broken from the delegation to go to Lahore where she converted to Islam and married a Pakistani citizen. A widow, she left three children behind in India. Indian officials wondered if she was spotted on social media — where she met her Pakistani husband — as an emotionally vulnerable target.

“Concerns have also been conveyed at repeated attempts by entities in Pakistan to extend support to secessionist movements in India and incite the Indian pilgrims, and Pakistani authorities (have been) asked to ensure that no such activity is carried out from Pakistani soil,” said a statement by the MEA. The pilgrims were visiting Panja Sahib on the death anniversary of Maharaja Ranjit Singh. 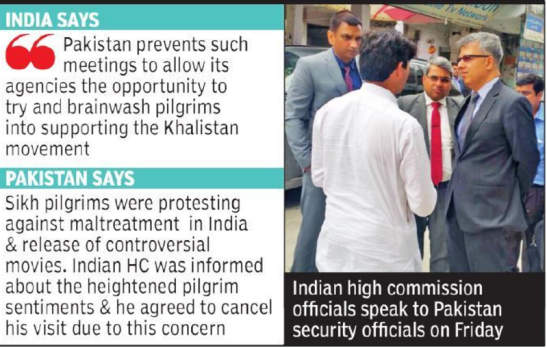 The Pakistan foreign ministry spokesperson claimed in a tweet that Bisaria was informed about what he described as heightened pilgrim sentiments against India and that concern over the same had led the Indian high commissioner to cancel his visit. “Sikh pilgrims were protesting against their maltreatment in India and release of controversial movies,” the spokesperson said.

India conveyed to Pakistan that preventing the Indian high commission officials from discharging their consular responsibilities is in violation of the Vienna Convention on Diplomatic Relations of 1961, and the 1974 bilateral protocol on visit to religious shrines. Indian organiser SGPC, when contacted by MEA, expressed concern and dismay that the envoy was turned away.