Communal tension in Fatehpur, Rajasthan after attack on Kanwar Yatris.

Mosque Mikes used as a tool to create communal tension…. 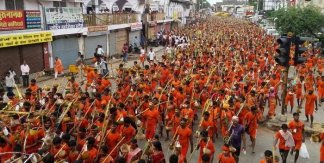 The conflict began when a kanwar yatra (Hindu procession carrying holy water in Shravan Month dedicated to Lord Shiva) procession was passing by a mosque here yesterday evening. A group of Muslim youths demanded that the music of kanwar yatra be minimized or stopped, an official said. A heated argument broke out between the two group and it soon turned into a communal clash. Sources said, abusive languages were hurled from the Mosque mikes and that created the situation more critical.

As the Muslims attacked suddenly, eight kanwariyas were injured. As an aftermath, right wing groups held a sit-in protest at Bhoothnath temple and Lakshminath temple here, demanding arrests of all Jihadi perpetrators. The protestors pelted stones on police personnel in a rage. Some members of the Hindu organisations started attacking the community opposed the kanwar yatra and shutting the shops in the market area .

The police resorted to cane charging, lobbing of tear gas shells and firing rubber bullets in the air to disperse the crowds and control the situation. Section 144 of CrPC was imposed in the town. The internet services of the affected areas have been dislodged so that further rumors couldn’t be spread.

The situation is under controls though tensed and the police arrested three persons from the Muslim community, Sikar SP Pradeep Mohan Sharma said.