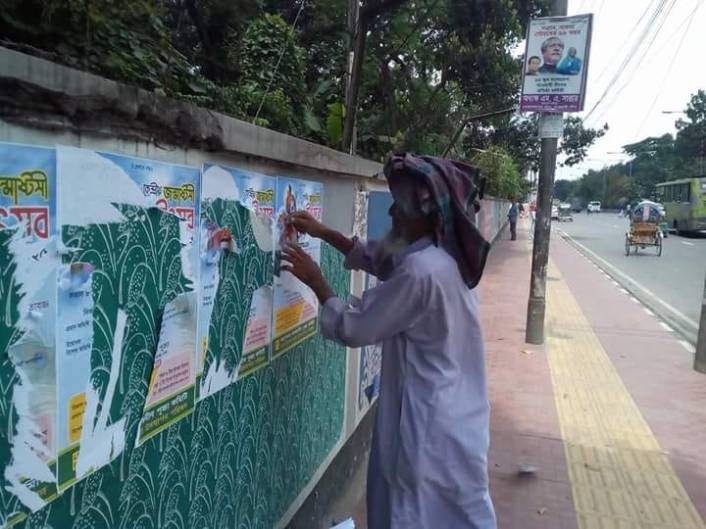 Islam can’t tolerate the faith of others….

Removal of Janmastami Posters by fanatic Muslim in Bangladesh.

The incident took place near Gana Bhavan (Public Administrative Building) in Bangladesh capital in broad day light at about 11.30 am.

Many passers by just looked at the craziness of the bearded man, but nobody could protest the matter.

The posters were mounted in the street and road side walls to highlight the festival of Janmastami as scheduled on 2nd September this year.

Hindus observe the birthday of Lord Krishna on Janmastami as their major festival.

In Islamic Bangladesh, the rights of observing the Hindu festivals are under severe suppression due to threat perception of fundamental Jihadi groups who do not allow such un-Islamic festivity in an Islamic country. Hindu persecution is all time high in Bangladesh and the Hindu population is decreasing rapidly there due to Islamic repression.

However, Hindus try to maintain their festivals unitedly in Bangladesh to keep the culture alive.

The video in this report amply clarifies the Islamic mentality over the festival of others.

Islam cannot tolerate the faith of others anyway in any manner.

This entry was posted on August 30, 2018 by hinduexistence in Anti-Hindu, Attack upon Hindu Festival, Hindu Festivals, Hindu Minorities in Bangladesh, Hindu Persecution in Islamic Bangladesh, Hindu Tradition and Culture under attack, Hindus under Islamic Aggression, Save Hindu Minorities in Bangladesh and tagged Fanatic Muslim removes Janmastami posters in Dhaka, Islam can't tolerate the faith of others.