Central Govt must exercise its power to save God’s Own Country from Communist’s Devil Country.

Is it a state of Emergency right now in Kerala?

Record breaks in police repression and arrest of Ayyappa devotees. Nearly 5,800 arrested in Sabarimala violence in Kerala and 4,980 persons have been granted bail so far.

B upendran | HENB | Thiruvanathapuram | Jan 7, 2018:: Kerala had a suffocated Sunday after four days of widespread violence involving BJP-RSS and ruling CPI(M) workers following the entry of two women of menstruating age into the Sabarimala temple under police protection as provoked due to an irresponsible verdict given by Supreme Court on Sabarimala entry issue nulling the restriction for 10-50 years women in the shrine. About 5,769 people have been arrested and 1,869 cases registered so far.

Of nearly 5,800 persons arrested in connection with the violence. At least 4,980 persons have been granted bail, a Kerala state police chief Loknath Behara said.

While in Palakkad, 283 cases have been registered so far and 764 persons arrested, in Kannur district, where crude bombs were thrown at the house of Thalassery MLA AM Shamseer and BJP leader and MP V Muraleedharan, 225 cases have been booked and 394 arrested so far.

In Pathnamthitta district, where the Sabarimala temple is located, 267 cases have been registered and 677 people arrested so far.

The law and order situation in Kerala disappears and ruling communists govt in Kerala is trying to blame Hindu devotees of Lord Aayyappa Swami and the members of RSS-BJP in a very nefarious way.

As per reports, activists and members of the Democratic Youth Federation of India, which is the student wing of the CPIM, and the ruling CPIM goons vandalised and pelted stones at Jumma Mosque in Perambra. While initially the act was blamed on the Sangh Parivar and Hindu activists, after police investigations it has come to light that CPIM and DYFI activists were behind it.

News portal MyNation has accessed the police FIR which names the local CPIM branch secretary Atul Das and 20 other persons who belong to the DYFI and CPIM. A case had been registered against them under section 153 for promoting enmity between two groups and attempting to cause riots.

Kerala: Perambra police registers case against 21 DYFI and CPIM workers under section 153A for promoting enmity between two groups and attempting to cause a riot.

Das attacked the mosque on Thursday, during hartal called by the Sabarimala Karma Samiti in protest against the CPM-sponsored violation of tradition in Sabarimala.

A CCTV camera installed near the mosque captured the visuals of the CPM leader and other DYFI workers who indulged in the attack.

CPM in collaboration with various religious terrorist and anti-national outfits unleashed violence across the state on the hartal day to vitiate the communal atmosphere of the state and malign the Hindu organisations. The police said that the motive of the assailants was to create a communal riot in the region. The accused have been booked under various sections of IPC and CrPC, including those of instigating communal riots.

It is reported that at least two persons are killed in retaliatory violence, four persons are suicide and five persons chopped off by Jiuhadi goons deployed by the Communists and hundreds are injured in recent row of Sabarimama protest. Even then the Hindu unity stands still for Sabarimala.

It’s really a good sign that all the Hindu Organisations in Kerala attached to Sangha Parivar, BJP and AantarRashtriya Hindu Parishad are unitedly fighting for restoration of Sabarimala Tradition violated by the culpable Indian Judiciary represented by Supreme Court of India and the anti-Hindu Communist Govt in Kerala.

Now, the Sabarimala row has stormed the Indian Parliament also as BJP MP Meenakshi Lekhi on Friday (4 January) launched a passionate defence of Sabarimala traditions in the Lok Sabha.

In the backdrop of massive protests by Sabarimala devotees in Kerala, Lekhi attacked the detractors like SC and Kerala Govt by claiming that they neither understand Hinduism nor its rituals.

A clip of her statement was posted by the BJP on Twitter: 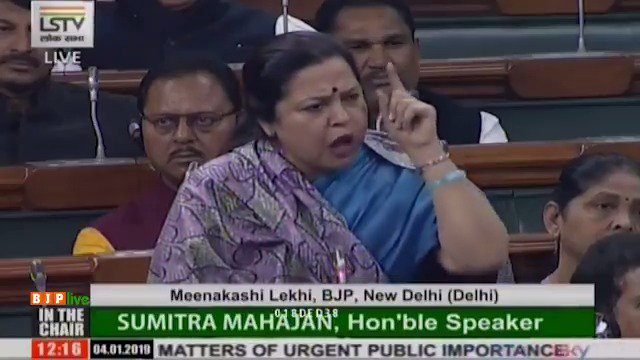 In the video+ she questioned whether the Supreme Court would decide how Jesus took birth or which body should be buried or cremated.

Further taking on the Supreme Court she rhetorically asked whether it would rule that the 41 day abstinence marked by Sabarimala devotees be reduced to a smaller time-frame.

She also attacked the Communist Kerala government’s high-handed action against the devotees and slammed the manner in which it sneaked in two women into the temple.

In the meanwhile, Smriti Irani, a cabinet minister in Modi Govt told the reporter that the law and order situation in Kerala is so grave that nobody is safe there whether a common citizen or a parliamentarian.

BJP MPs staged a protest in the Parliament complex today+ against incidents of violence targeting Ayyappa Devotees and their leaders in Kerala, including a crude bomb thrown at the residence of Rajya Sabha MP V Muraleedharan which they blamed on the state’s CPI-M led government.

Emergency like situation prevails in Kerala. God’s own country boils due to Sabarimala row. Communist Govt of Kerala turned God’s own country as the Devil’s country. Central Govt should deploy Military in Periyar National Park, in which the Ayyappa Shrine is situated, to restore peace and tradition in Sabarimala. It’s under the Union jurisdiction. Central Govt must exercise its power.

….
__Inputs from Agencies.
__Courtesy to the links and pics used above.

This entry was posted on January 7, 2019 by hinduexistence in Anti Women, Anti-Hindu, Attack on Hindu Sentiments, Attack upon Hindu Sentiment, Attack upon Hindus, Attack upon Hindus by Marxists, Attack upon Hindus by Muslims, Breaking India by Communists, Breaking Indian National System by Muslims, Communist Menace, Communist Terrorism, Conspiracy against Hindus, Hindu Demand To Save Sabarimala, Hindu Protest, Hindu Retaliation, Hindu Solidarity, Save Hindus in Kerala, Save Sabarimala Tradition and tagged Central Govt must exercise its power, Communist's Devil Country, Communists attacked mosque to incite riots, God's own country, Is it a state of Emergency right now in Kerala?, Record breaks in arrest of Ayyappa devotees, Record breaks in police repression in Kerala, Sabarimama Row in Parliament, Save God's Own Country.