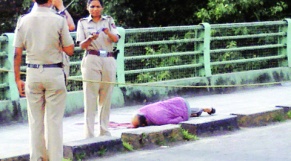 Upendra Bharti | HENB | Pune | May 25, 2019:: A senior lawyer representing some of the accused in the Narendra Dabholkar murder case was on Saturday arrested by the Central Bureau of Investigation, an official said.

Advocate Sanjeev Punalekar and a Sanatan Sanstha member identified as Vikram Bhave were held from Mumbai and will be produced in a Pune court on Sunday, the CBI official said. Adv. Punalekar is an eminent lawyer connected with cases of Malegaon Blasts and such cases which are involved to defame Hindu activists for establishment of an unreal “Saffron Terrorism”. Advocate Punalekar is also the national secretary of a law forum named as Hindu Vidhidnya Parishad. Another arrested Bhave is the writer of “The invisible hand behind Malegaon Blast- मालेगांव बम-विस्फोट के पीछे का अदृश्य हाथ+”. The book divulged the conspiracy of anti-Hindu rulers to set a plan to accuse the Hindus as terrorist

The official of CBI said preliminary probe had revealed that Punalekar was known to one of the shooters of Dabholkar.

The cause of arrest of Vikram Bhave is still unknown to HENB.

Dabholkar was shot dead while he was on a morning walk on the Onkareshwar Bridge in Pune on August 20, 2013. So called Rationalist Dabholkar was infamous for his anti-Hindu stand and he tried to abuse Hindu dharma many times creating repercussion among the Hindu activists.

Both Adv Punalekar and Bhave were preparing to join All India Hindu Rashtra Convention to be held in Goa during 27th May to 4th June+. The unwarranted arrest of them would be a ploy to disturb the said convention and put fear to other participants for joining the programme.

In a telephonic conversation, eminent Hindu interlocutor and Hindu Existence web editor, Upananda Brahmachari condemned the arrest and  told HENB, “Both Punalekar and Bhave are well known to me and they are true Nationalist, real Patriot and strong supporter of Hindu Rashtra. The CBI’s apprehended connection of Adv Punalekar and Malegaon Book writer Bhave with Dabhokar’s murder will be proved false as like the cases of Sadhvi Pragya and Swami Aseemananda. The same CBI and ATS tortured brutally on Shadvi Pragya and exploited the life of both Sadhvi and Swami under long detention over years illegally. Pune Court must give bail of both Punalekar and Bhave on Sunday”.

In a press note Sanatan Santha also condemn the arrest under a ‘pro-Hindutva Government‘ and cleared its stand.

In its press statement, Sanatan Sanstha “strongly protested” the arrest of two of its activists, claiming that it was a “conspiracy” by the “progressives” after a “pro-Hindutva government” was elected to power.

Its statement read, “To arrest Adv. Sanjiv Punalekar and Shri. Vikram Bhave when the pro-Hindutva Government is in power smacks of conspiracy behind such an action. The CBI has bowed before the demand of the progressives. It is very serious to arrest Adv. Sanjiv Punalekar who proved the falsehood of saffron terrorism behind Malgaon explosion case, filed several Public Interest Litigations.”

The first arrest made by the CBI in connection with murder case was in 2016 when the probe agency had nabbed ENT surgeon and Sanatan Sanstha member Dr Virendra Tawde, who has been accused of being the mastermind behind the conspiracy to murder Dabholkar.

In its chargesheet against Tawde, the CBI had stated that Sanatan Sanstha members – Sarang Akolkar and Vinay Pawar – had shot at Dabholkar, killing him.

However, later, the CBI alleged that arrested accused Sachin Andure and Sharad Kalaskar had pulled the trigger and killed Dabholkar on August 20, 2013, when he was out during his morning walk in Pune.

During the course of the investigation, CBI arrested three more people – Amol Kale, Amit Digwekar and Rajesh Bangera – who also allegedly played a role in the murder of Bengaluru-based journalist and activist Gauri Lankesh in September 2017.

Punalekar and Bhave would be produced before the special court in Pune on Sunday, a senior CBI official confirmed to PTI. With the arrests made on Saturday, the total number of arrests made in connection with the Dabholkar murder case has reached eight.