HJS assumes an anarchy in Maharashtra, if the BJP-SS  pre-poll alliance breaks up anyway. 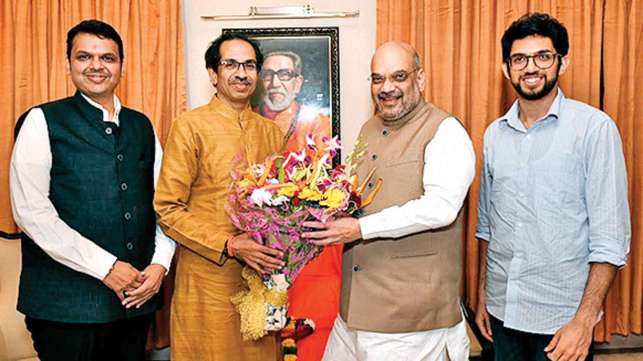 A non BJP-SS Govt in Maharashtra may be dangerous for Hindus as Ayodhya verdict likely to be delivered by SC in some days.

BJP and Shiv Sena should come together and assume power in the interests of Hindutva and people of Maharashtra: Hindu Janajagruti Samiti. 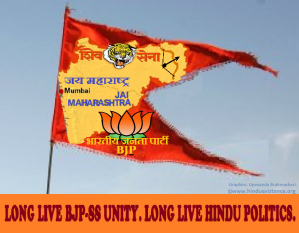 Upendra Bharti | HENB | Mumbai | Nov 4, 2019:: The day on which the CM project by BJP, Devendra Fadnavis met Party President and Union Home Minister Amit Shah in Delhi+, various Hindu organisations appealed to BJP-Shiv Sena alliance to form a coalition Govt in the state for the prospect of Hindus and Hindutva movement in Maharashtra.

In a press statement signed by Ramesh Shinde, the National Spokesperson of the Hindu Janajagruti Samiti (HJS) expressed the views of the like minded Hindutva organisations in favour of the formation of a BJP-SS coalition Govt without any further delay.

The press statement reads: “In the recently held Assembly elections, the people in the State have given the grand alliance of BJP and Shiv Sena the preference to establish a strong and steady Government. Both the political parties have joined hands due to the common ideology of Hindutva. Leaders of both parties are aware of the interests of the State and Hindu community; however, secular parties in opposition are taking disadvantage of the delay in forming the Government. The farmers in the State were put to a lot of loss due to unseasonal rains. In such a situation, to safeguard the interests of the people of Maharashtra and Hindutva, BJP and Shiv Sena should come together as soon as possible and establish a firm Government.”

The press statement of HJS clearly indicates: “This is not only our stand but devout Hindus, Varkaris, various spiritual and patriotic organisations also feel that the united power of Hindus should not be divided.”

Further the press statement goes: “During 1992-93, riots took place in Maharashtra when Babri Masjid on Shriram Janmabhoomi was demolished in Ayodhya. The Supreme Court is likely to give its verdict in Shriram Janmabhoomi case very soon. Even after this, anti-national powers are likely to create anarchy. In such a situation, it is essential that a firm and competent Government must be formed in the State. This is the feeling of all devout Hindus in the State”. 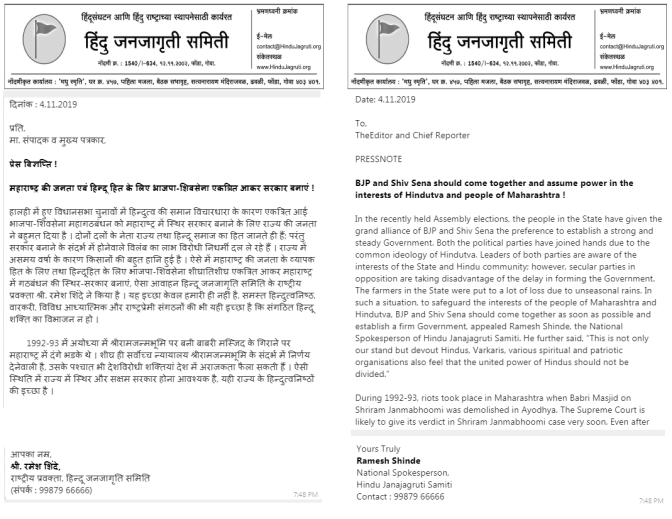 The HJS assumes an anarchy in Maharashtra, if the BJP-SS  pre-poll alliance breaks up anyway against the Hindutva based traditional unity of the grass-root level party workers from both sides.

Earlier, the eminent Hindutva interlocutor and Hindu Existence Website editor advised a ‘Tenure based power sharing between BJP-SS as a good solution for Maharashtra Hindu Politics+‘.

Courtesy: The Pics and Links used above.

One comment on “HJS assumes an anarchy in Maharashtra, if the BJP-SS  pre-poll alliance breaks up anyway.”