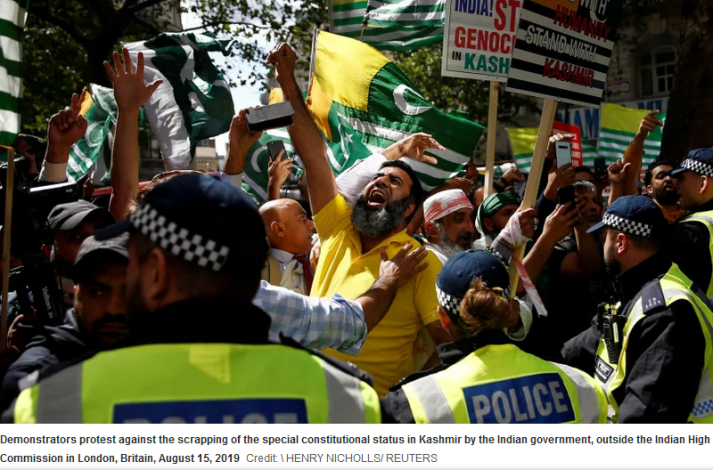 Pakistan is deliberately encouraging anti-Hindu, anti-Indian incitement and thuggish protests, fueling tension between diaspora communities. Who will stop their intimidation and violence, before it’s too late?

Shairee Malhotra | Haaretz Web | London | Nov 3, 2019:: In late October, during Diwali, the Hindu festival of lights, anti-India protests were held across London. In mid-August, on India’s Independence Day, I was inside the Indian embassy in Brussels as thousands of pro-Pakistan demonstrators loudly chanted anti-India slogans outside.

On the same day, in London, pro-Pakistan protestors trashed the Indian High Commission, pelting stones and eggs and breaking windows. In early September, the High Commission was vandalized again by protestors carrying flags of Pakistan-Occupied Kashmir.

On a much more personal note, a close Indian friend based in London recently described how he perceived as racist his arrest by a policeman of Pakistani origin for alleged drunk driving, despite being well under the alcohol limit. Whether the officer genuinely acted on bias, or this was merely my friend’s perception, one thing is clear: tensions on Kashmir are spilling over between Indian and Pakistani origin communities in the UK.

In the aftermath of the Indian government’s abrogation of Article 370, changing the constitutional status of Kashmir, Pakistan has created “Kashmir cells” at its embassies around the world in order to incite local populations against India. It is a campaign dedicated to bringing its sinister propaganda to an international audience – and to legitimizing its provocateurs to bring the Kashmir conflict on to Europe’s streets.

This week, the 2019 Kashmir-EU Week takes place on the premises of the European Parliament. The chief guest is the so-called “Prime Minister” of the so-called “Azad” Kashmir – that part of Kashmir wholly under Pakistani occupation, but which Pakistan ironically refers to as “Free.” The area has an appalling human rights record. According to Christine Fair, the Georgetown University professor who has spent decades studying the region, “Azad” Kashmir is Pakistan’s core launchpad for terrorists into India.

This is at least the third time that Raja Farooq Haider Khan is being feted in the EU capital, having also been hosted previously by both the European External Action Service – the official foreign policy arm of the EU – as well as the European Parliament.

Courtesy: Haaretz & The Times of Israel.

One comment on “Anti-Indian Pakistan Fuels Anti-Hinduism Among Muslims in Europe.”