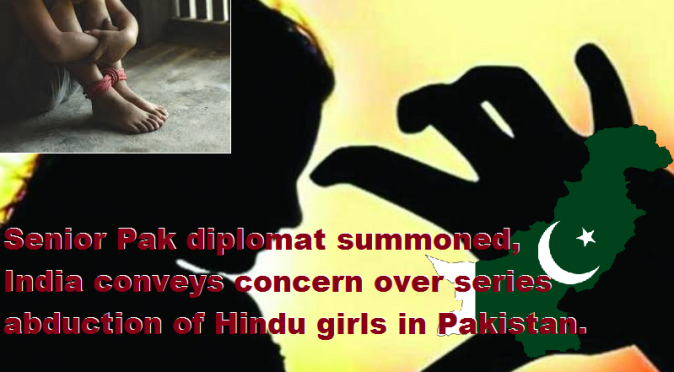 Upendra Bharti | HENB | New Delhi | January 18, 2020:: In a first time, Indian External Affairs Ministry on Friday summoned a senior official of the Pakistan High Commission here over the issues of persecution upon minority girls on abduction and lodged a strong protest over recent cases of series abduction of minor girls belonging to minority Hindu community in that country, official sources said.

As per reports, two minor girls, Shanti Meghwad and Sarmi Meghwad belonging to the minority Hindu community were abducted from a village in Sindh province on January 14.

“Pakistan has been conveyed the grave concerns as expressed amongst various quarters of the Indian civil society at such a shocking and deplorable incident involving minor girls from the minority Hindu community there. The incidents have been strongly condemned, and India has asked for immediate and safe return of these girls to their families,” said a source.

These girls belonged to Umar Village in Sindh, according to reports.

In another incident, a minor girl, Mehak, also belonging to the minority Hindu community, was abducted from the Jacobabad district of Sindh province in Pakistan on January 15, according to reports.

In recent, Jihadi Muslims tried to attack Gurudwara Nankana Sahib+ on January 3, to free a Muslim guy, Muhammad Hassan from police surveillance, who abducted, forcefully converted and married a sikh girl Jagjit Kaur of a granthi (sikh priest)+ in September 2019.

On Januaru 5, a Sikh man was killed in Pakistan’s Peshawar by Jihadi elements, after Nankana Sahib attack+.