WB: Jihadi people attacked Hindu students as they demanded restart of Saraswati Puja in their School.

Rabiranjan Ranjit | HENB | Barasat | January 25, 2020:: The Chauhata area under Harawa police station in North 24 Parganas emitted heat on Friday, when students were demanding the restart Saraswati Pujo at their school. Two houses were set on fire, fifteen houses houses, all of Hindu residents of the locality, were vandalized by the TMC backed Jihadi goons. Locals have questioned the police’s role in the incident. It is alleged that the area would not be out of control if the police came in time. Police arrived in the area in the evening hours after the attacks and  brought the situation under control later.

Saraswati Pujo has been stopped for the past eight years at Chowhata Adarsha Vidyapeeth since 2012, when some fanatic Muslims of the area objected the Saraswati Puja in that school. The students of the school, started a road blockade in front of the school at 11 am this morning to demand Saraswati Puja again in the school. As a result, he Golghata-Harowa road became blocked. Students held placards showing, “বন্ধ হওয়া বিদ্যাদেবীর পুজো ফের চালু করতে হবে (start the festival as closed for worship of the deity of knowledge)” written in it.  Police have not come to the place in time even after getting such information of road blockades by the agitating students supported by few teachers.

After three o’clock in the afternoon, the situation became worsened. A group of Jihadi people started throwing brick-and-stones at the students sitting on road blockade. It is alleged that some school students were also beaten. Fear and tension raised high when a masked group of Jihadi people came armed in the evening and set fire on two Hindu houses in the village of Chauhata and vandalized fifteen houses of Hindus. Several Students and a teacher injured badly.

Read this news in Bengali: 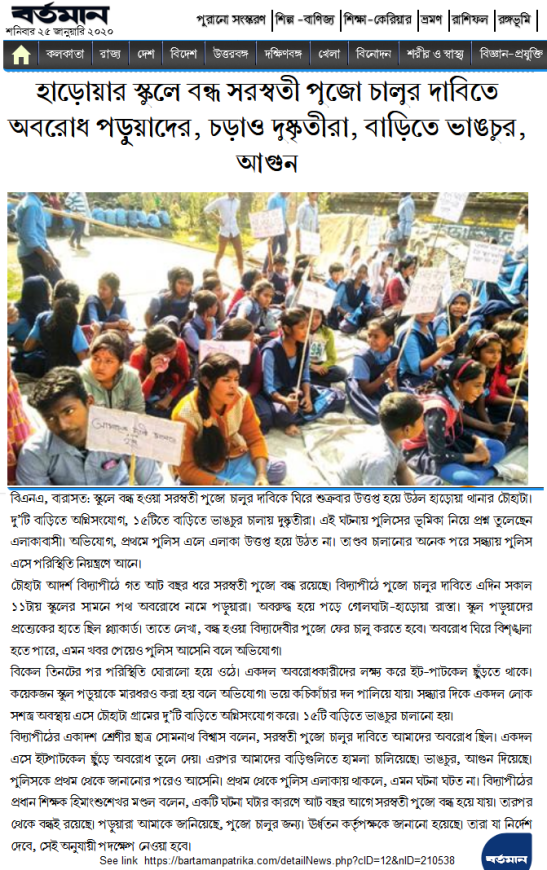 Somnath Biswas, an eleventh-grade student of the school said, “We staged a road blockade to demand Saraswati Pujo. A group came and threw heavy bricks and stones to us to lift the blockade. Then they attacked our homes,  vandalized an set fire the Hindu houses. The police did not come even after getting the first report. If the police arrived in the area from the beginning, this would not have happened.”

Himangshu Shekhar Mandal, head teacher of Chowhata Adarsha Vidyapeeth, said that Saraswati Puja in the school was closed eight years ago due to an ‘incident’. It has since closed. The students have appealed me to restart the Puja.  “We have conveyed the appeal of the students to the higher authority.  What they will direct, action will be taken accordingly,” Mandal told HENB.

Ganesh Sardar, a popular teacher of the school who supported the cause of the students for the demand of restarting Saraswati Puja in the Chowhata Adarsha Vidyapeeth, was brutally thrashed by the Jihadi public opposing the puja in the school.

Goddess Saraswati is believed as the deity of knowledge and learning according to Hindu faith. In Bengal, Saraswati Puja is conventionally performed in all schools, colleges, universities and students’ hostels.

But, for the Jihadi rise in WB, Saraswati Puja programmes in Sri Panchami have been stopped in hundreds of schools and educational institutions in the Muslim majority districts and Muslim influenced areas in Bengal. under the patronage of pro-Islamic ruling Trinamool Congress Party.

WB CM Mamata Banerjee is too much reluctant to address the religious rights violation of Hindus, rather she is interested to appease Muslims by curtailing the liberty of Hindus.

Update on 26.01.2020:: The area is still under the grip of tension. Police contingents have been posted near the school, Chowhata Adarsha Vidyapeeth.

Head Master of the school, Himangshu Shekhar Mandal told HENB that the Managing Committee of the school has not taken any decision over the restarting of Saraswati Puja in the school.

Local Hindu people said that the Saraswati Puja was stopped in the school in 2012 due to objection of the some leaders of ‘other community’ who are now active in the fold of ruling Trinamool Congress Party, popularly known as ‘TMC’ which bears a connotation as ‘Total Muslim Congress’!!