Hindu girl abducted from wedding ceremony, forcibly converted and married off a Muslim man in Pakistan. 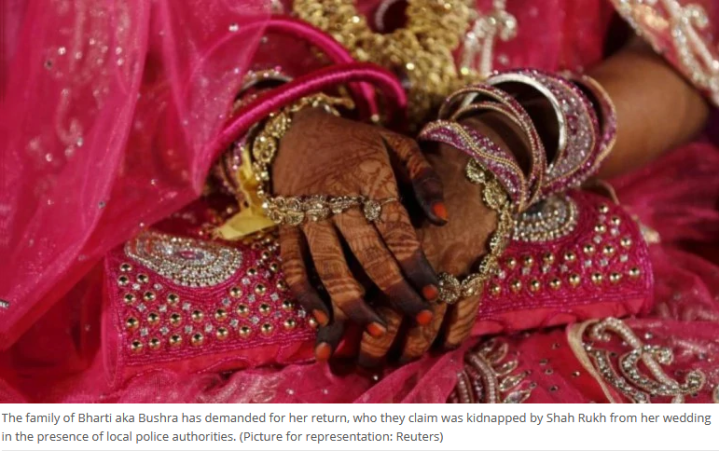 Pakistan: Muslim man abducted Hindu girl from her wedding ceremony and converted to Islam to marry her forcefully.

Kishore Das, the father of Bharti Bai, said his daughter’s marriage ceremony was underway when the kidnapper named Shah Rukh Gul came with several men along with policemen and took his daughter away in broad daylight.

Hamza Ameer | India Today Online | Karachi | January 27, 2020:: In Pakistan’s Sindh province, where several cases of abduction, conversion and marriage of young Hindu girls have been reported in the recent past, another case surfaced on Sunday.

A 24-year-old Hindu woman was allegedly kidnapped by assailants under the supervision of local police authorities from her wedding venue in Hala, a city located in Matiari district in Sindh province, about 215 km away from the provincial capital Karachi.

According to reports, the woman Bharti Bai, was then forcefully converted to Islam and married to a Muslim man.

Bharti was to be married to a Hindu man in Hala city, when unknown assailants allegedly stormed the venue and kidnapped her. Kishore Das, the father of Bharti Bai, said his daughter’s marriage ceremony was underway when the kidnapper named Shah Rukh Gul came with several men along with policemen and took his daughter away in broad daylight.

Later, a picture of Bharti along with documents of her conversion to Islam and marriage to Shah Rukh Gul went viral on social media.

According to the documents of her conversion, it seems that Bharti had converted to Islam on December 1, 2019, which may be the reason why she was taken away from her wedding venue.

As per the conversion certificate, Bharti’s new name after converting to Islam is ‘Bushra’. Jamiat-ul-Uloom Islamia, located at Allama Muhammad Yousuf Banuri town in Karachi, issued the certificate of Bharti’s conversion while her conversion was witnessed and certified by Mufti AbuBakar Saeed ur Rehman.

As per her National Identity Card, details of which were shared in the documents, her permanent address is in Hala. However, her temporary address is of Gulshan Iqbal area in Karachi, which may be taken as her current area of residence.

It is still uncertain as to when she got married to Shah Rukh Gul. However, her marriage certificate aka nikkah document shows that the Muslim man is also a resident of Hala. Shah Rukh, the son of Nisar Ahmed, is also 24 years old.

The family of Bharti aka Bushra has demanded for her return, who they claim was kidnapped by Shah Rukh under the supervision and presence of local police authorities.

On the other hand, it is being said that Bharti had converted to Islam at least one month prior to the incident. Her parents allegedly found out about her conversion and were getting her married to a Muslim man forcibly.

It is being claimed that the news of her marriage prompted Shah Rukh Gul to go to the police and claim that Bharti aka Bushra was his wife and being married off by her parents to a Hindu man illegally.

Even though the news and details of the whole episode is based on details gathered from locals in Hala, the issue has raised serious concerns amongst the Hindu community in Pakistan, who are questioning the Imran Khan-led government of its promises to provide security to minorities in the country.

One comment on “Hindu girl abducted from wedding ceremony, forcibly converted and married off a Muslim man in Pakistan.”