Opposing the BJP Doesn’t Mean Opposing Hindus. If you want to work for India, work for Hindus: Bhaiyyaji Joshi. 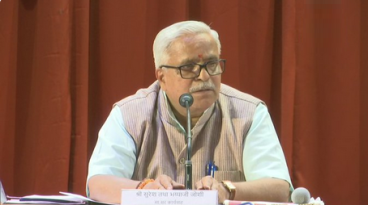 Opposing the BJP does not amount to opposing Hindus, RSS (Rashtriya Swayamsevak Sangh)  general secretary Suresh ‘Bhaiyyaji’ Joshi said on Sunday in remarks quite untypical of the ideological parent of the BJP.

Joshi was asked the question ‘why Hindus are becoming the enemy of their own community?’ at a lecture on ‘Vishwaguru Bharat’ Dona Paula near here.

The RSS leader’s remarks come amid vociferous protests against the ruling BJP over the Citizenship Amendment Act, criticized by activists and the opposition as discriminatory towards Muslims. Despite a polarizing and star-studded campaign around the burning issue in Delhi, exit polls have predicted a loss for the BJP in assembly elections.

“A Hindu fights against a fellow (Hindu) because they forget the religion. Even Chhatrapati Shivaji Maharaj faced opposition from his own family… Where there is confusion and self-centered behaviour, there is opposition,” he said.

“Some claim that Vivekananda’s Hindutva is good and not that of Vinayak Savarkar. What is the basis for such claims?” he said.

Joshi said that Communist rulers in West Bengal claim that they are against Hindus, but when it comes to heading Durga Puja mandals, they are always in the forefront. “Similar is the situation in Kerala, where Communists want to be president of temple committee,” he added.

Joshi advised that Hindus should rise above politics. Responding to a question, Joshi said that the people from all communities are welcome to join the Sangh.

He said that those who believe in the ideology of the Sangh can join and they would be given “respectable position, but not a separate position”.

“Sangh has given position to everyone. Whoever wants to come to Sangh they are welcome. We never stopped non-Hindus from joining Sangh. It is true that we have focused on Hindus. But if someone from Christian community or a Muslim agrees with Sangh’s ideology, they can also join it,” Joshi added.

“After joining the Sangh, if they are reluctant to say ‘Bharat mata ki jai’, then we will say that you don’t consider ‘Bharat’ as your mother, so you don’t deserve to be here,” he said.

Responding to another question, Joshi said that government servants are not barred from joining the RSS, although they are barred from becoming part of political movements.

Joshi said that there is no example of any government servant losing his job for joining the RSS, but there are ample examples wherein they were harassed for being part of the organisation.

In reply to another query, Joshi said that Hindus cannot be considered as communal as the religion does not believe in single religious book or single God.

“Let them define the word communal. Communal has become a bad word these days. We believe that Hindu can never be communal in the country,” he said.

“It is wrong to consider Hindus as communal or those who work for Hindu religion. We don’t believe in singular religious book (granth), singular God…We have to ask them what is the definition of communal,” he said.

If you want to work for India, work for Hindus: RSS’ Suresh Bhaiyyaji Joshi.

In the  conclave as assigned ‘Vishwaguru Bharat – An RSS perspective, which is advertised as an effort to disseminate RSS’ vision for the nation,’ held in Goa, Bhaiyyaji Joshi clarified the Hindutva line of the organization for giving the priority and importance on Hindus and Hindutva in India.

Those who want to work for the ‘Idea of Bharat (India)’ will have to work for Hindus, the Rashtriya Swayamsevak Sangh’s (RSS) general secretary Suresh Bhaiyyaji Joshi said claiming Hindus are the “core of this nation”.

“India cannot be separated from Hindus. If India is still ‘living’ the reason is Hindus. At the core of this nation is Hindus, and whoever wants to work in this country, he will have to work for the Hindu community,” Joshi said.

Joshi pointed out that it didn’t mean working against any other community but rather working primarily for Hindus.

Speaking at the event attended by Goa chief minister Pramod Sawant, who escorted Joshi into the auditorium, as well as the BJP’s top brass in the state, the RSS leader said it is Hindus who hailed from a great civilisation and were witness to the “ups and downs of India.”

“India will never end. It’s probably the only nation which has seen so much oppression… it has always still risen. In fact, India was from eternity and it will remain for eternity. In that sense Hindu samaj will never die,” Joshi said.

“And we have a role and responsibility to teach and educate this to the world. There are beliefs and few communities where people say theirs is the only path. We have to now say, your path is one, but so is our path,” he said.

India, Joshi said, has a duty to teach the world to walk on the path of samanvay or integration. And, there is “no one besides India and besides Hindus” who can do it.

“When the world will accept this ideology then all the issues of the world would be solved. It is the duty of India to take the world on that path he told the audience,” Joshi added while calling on the audience to ensure that the ‘idea of Bharat’ is disseminated.

“You cannot always rely on the government. The onus is now on us,” he added.

__Inputs from PTI and HT.

One comment on “Opposing the BJP Doesn’t Mean Opposing Hindus. If you want to work for India, work for Hindus: Bhaiyyaji Joshi.”