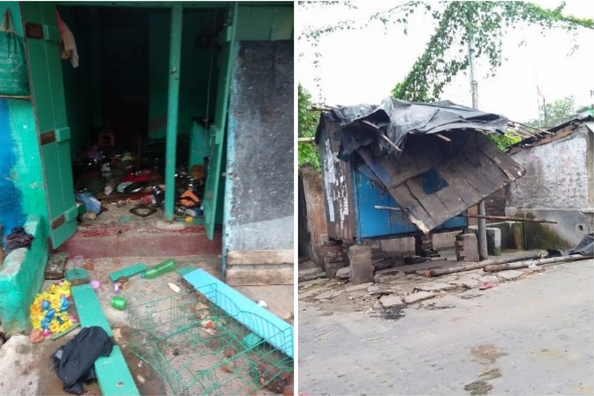 Why Muslims in WB are above the rule of lock-down, testing and quarantine?

Muslim Families and Neighbours of Corona Positive patients attacked upon Hindus as they demanded testing and quarantine for affected  families. 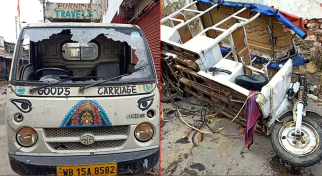 Hooghly Lok Sabha MP Locket Chatterjee has said that the situation there is tense and Hindus fear renewed attacks since the police have not taken any action against the attackers. Local Muslim goons under TMC (ruling party in WB) patronage vandalized many Hindu houses, business and temples rampantly in Ramadan. Muslim perpetrators torched many Hindu houses and hurled country made bombs in Hindu areas.

According to Chatterjee, Muslims from Wardibazar entering Telinipara, a township off Grand Trunk Road near Chandannagar, were enraged over enforcement of lockdown restrictions by the police. The Muslims of the area were also reportedly angry with police’s attempts to send them to quarantine centres after some people in the densely-populated area tested Covid-19 positive.

Trouble broke out when some people from Wardibazar area tried to enter the Telinipara area Sunday evening. Wardibazar reportedly had some COVID-19 positive cases and several people in quarantine. So when 10-odd people from there headed to Telinipara, apparently to use a public toilet, locals objected and clash broke out.

Locals also say that some Hindu families objected to the flouting of the lockdown restrictions by the Muslims. In the Ramadan day Muslims of the adjacent areas generally perform Ifter (Ramadan fast breaking) and taraweeh (Special Quran recitation in the evening after Ifter) violating all lockdown norms. Just after breaking daily fasting of Ramadan, Muslims thronged to attack Hindu localities.

That, they say, triggered the attack on Hindu homes and establishments in Telinipara and Chandannagar.

A planed Islamic attack was unleashed on Hindus of Telinipara during Ramadan. (Pic. T Halder).

A tweet from BJP Bengal’s official handle charged the ‘vote bank patronized by the Trinamool’ with “holding the state to ransom and flouting Covid guidelines at will without any fear of law”.

BJP MP Locket Chatterjee told media that the Muslim people led by Local TMC Councillor (Ward no 14) Firoz Khan attacked the Hindu people, houses under the indulgence of WB CM Mamata Banerjee. The Role of police was so inactive that the Muslim perpetrators looted Hindu houses and torched many houses and Hindu establishment without any restraint. She also demanded Union Government’s intervention to stop the lockdwon violations and law and order situations created mostly by minority Muslim community in WB to put trouble for the majority Hindu community. 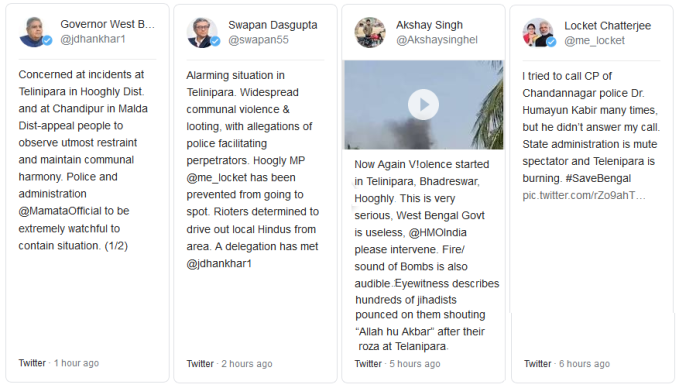 The BJP MP also alleged that arms and bombs were supplied in ambulance to the perpetrators to run the havoc till Monday afternoon. She also announced a list of Mohammad Anwar & Family, Sheikh Nasir & Family, Sheikh Dula & Family, Masuma Bibi Mukhtar & Family, Kamaluddin Fulbabu & Family, Nasima Bibi & Family and Sheikh Enamul and Family who are  suspected Covid 19 positive, but Govt is not sending them in quarantine for an appeasement for the Muslims so far. These Muslim families are posed to threat for spreading Corona virus in the area as told by the BJP MP in an interview.

Police stated that they fired 26 rounds of tear gas and ten rounds of rubber bullets to bring the situation under control and detained 37 miscreants. Sec 144 CrPc was imposed in the areas to control the situation.

However, Locket met WB Governor Jagdeep Dhankar to brief the Telinipara situation for which Governor has expressed his grave concern for the law and order situation in WB worsening day by day.

For the lockdown violations by the Muslims, the rise of Corona Positive  is tremendously high in in West Bengal.