Danish Kaneria Narrated his Ordeal being grossly discriminated as a Hindu Cricketer in Pak Team. 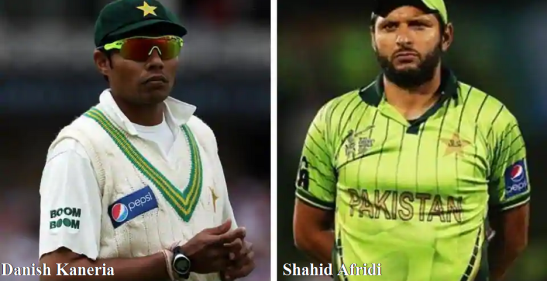 ‘He was always against me,’ Danish Kaneria levels allegation on Shahid Afridi for being discriminatory.

Priya Rohit Sharma | HENB | Delhi | May 16, 2020:: In the past 5-6 months, former Pakistan spinner Danish Kaneria has been very vocal about his international career and the various controversies he got embroiled in. Kaneria had earlier supported Shoaib Akhtar’s claims of discrimination against him, saying that he would take the names of the responsible cricketers soon. Akhtar had alleged that his former teammate Kaneria faced discrimination at the hands of a few Pakistani cricketers, who were reluctant to even eat with him because he is a Hindu. Such religious hatred of some Muslim cricketers against a rare Hindu minority cricketer revealed a new witch hunt in Pakistani Cricket Team.

Now, Kaneria has accused former Pakistan captain Shahid Afridi as the one who treated him unfairly all through his career. Kaneria went on to blame Afridi for his short limited-overs career.

Speaking to PTI from Karachi, the 39-year-old said, beyond his religion, it was difficult for him to think about the reason behind Afridi’s  discriminatory behaviour.

“He was always against me, when we were playing for the same department in domestic cricket or playing me in ODIs. If one person is always against you and you are in that situation, what other reason would think other than that (religion),” said Kaneria when asked if he was a victim of religious discrimination.

Kaneria, who last year supported Shoaib Akhtar’s claim that he was treated unfairly in the team because of his Hindu religion, said he could have played a lot more than 18 ODIs if it was not for Afridi.

“I could not play more ODIs because of him and he also treated me unfairly when we used to play for the same department (in domestic cricket), he was the captain. He used to keep me out of the side and often he would do the same in ODIs without any reason.

“He used to support others but not me. Thanks to almighty, I still went on to play a lot for Pakistan and I could not be more proud of that.” Kaneria said he used to be a regular member of ODI squads but hardly got to play, blaming Afridi again for that.

“I was a leg spinner and so was he. That was another reason. He was a big star and playing for Pakistan anyway and to treat me like that, I could not understand why!

The Islamic treatment upon a Hindu cricketer in Pakistani Cricket Team is nothing new considering the havoc minority persecution happening in that Islamic country since its inception.

___With the inputs from PTI.