102 Pakistani Hindus Forcibly Converted at Golarachi in Badin; Destroying all Deities, Temple Turned into a Mosque. 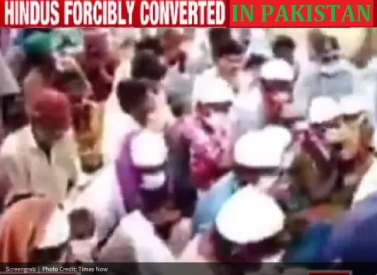 Paras Rajput | HENB | New Delhi | June 29, 2020:: In yet another shocking case of mass conversion emerging from Pakistan’s Sindh province where 102 Hindus have been allegedly forcibly converted to Islam in the Badin district.

According to Times Now, 102 minority Hindu men, women and children were converted to Islam in Golarchi, which falls under Badin district of Sindh province in Pakistan.

In fact, all idols of Hindu gods kept in a local temple were destroyed and the premises was converted into a mosque.

This is the double faced images of Pakistan as it allows first ever Hindu Temple in its capital with Rs 10 Cr Govt grant -in- aid+ in a camouflage and destroying/converting all Hindus there with its definite mission of “Kaffir less Pakistan”.

Here’s the full report as published in Times Now:

On May 17, Hindus in Sindh province had claimed that Tablighi Jamaat tortured them, vandalised their houses and also kidnapped a Hindu boy for refusing to convert to Islam.

A video from Sindh had gone viral on social media, showing Bheel Hindus protesting in Nasur Pur, Matiar, against the forced conversions.

“We will prefer to die but will never ever convert to Islam,” read the hand-written posters in the hands of women and children.

Speaking on behalf of protesters, a woman said that they were thrashed, their properties were forcibly taken and homes were destroyed. She added that they were being asked to convert to Islam if they wanted to get their houses back.

Notably, the news of persecution of Hindus and Christians almost regularly comes from Pakistan’s Sindh and Punjab provinces.

The Human Rights Commission of Pakistan (HRCP) had earlier this year said that over the years, “there have been horrific, religiously motivated attacks on the minority communities and any efforts towards eradicating the violence, prejudices, and inequalities have been virtually imperceptible”.

The HRCP added that the girls as young as 14 were kidnapped, forcibly converted to Islam and coerced into marriage in Punjab and Sindh.

The Hindu community in Pakistan has a history of being on target, added the commission.

“They are also forced to learn Islamic studies in school. There is also some concern that there are not enough Christian burial grounds and Hindu cremation grounds.”