Sankirtan Das | HENB | Kolkata | June 28, 2020:: The Vishwa Hindu Parishad (Dharma Jagaran and Goraksha units) and Bajrangdal units of North 24 Pgs (WB) rescued a 21 yrs Hindu Girl from Dumdum Cantonment area from a Jihadi racket on Saturday night under a tip off from a source.

The victim Moumita Haldar, daughter of Gouranga Halder of Ghuni, P.S. New Town was fallen in a Love Jihad Trap in the middle of 2014 of one Muslim guy Rakesh Tarafdar (don’t be misled with such a pseudo-Hindu name) of Noapara area, not far from the Dumdum Cantonment locality. Rakesh introduced himself as a Hindu to Moumita in a very ataractic way.

On December 2014, Moumita and Rakesh entered into a deep intimacy in a secrete place of which Rakesh captured many video of that intimacy beyond the knowledge  of her prey.

From that intimacy Moumita came to know that Rakesh was not a Hindu at all and Rakesh’s Muslim identity frustrated Moumita enough and she started to end that relationship made in a fraud.

But, Rakesh started to blackmail Moumita on the basis of those pictures of deep intimacy between them and at one point of time Moumita surrendered to Rakesh and compelled to tie a knot with Rakesh without her parent’s consent. Rakesh and Moumita entered in a wedlock by local Quazi of a Mosque.

As there was no relationship with her parents, Moumita had no option to meet up the dowry claim and had to bear all the tortures made by the unbearable Sharia people in her Husband’s family.

As all the family members of Rakesh were against Moumita, they started black magic on her and they used to take her in a nearby Mosque every Saturday on 9 pm to drink her some sanctified water and to engage her in the practice of Namaz.

In the meanwhile, Rakesh was preparing all fake identity and documents for Moumita in a fake pseudo-Muslim name of Runa Mondal showing her father as one Akbar Ali Mondal, using the photo of Moumita. In this process the fake identity producers procured Runa’s (actually Moumita’s) fake birth certificate from Kolkata Municipal Corporation -Health Borough III icw RG Kar Medical College and Voter card, Aadhaar card and even Pan card one after another.

In the last month, Rakesh and his family members demanded at least Rs. 2,00,000/- from Moumita’s parents and they also threatened her to drive out from the home, if not their demand was fulfilled anyway. As, there was no scope of the fulfillment of that demand, the perpetrators in Rakesh’s family confined Moumita in one Saraswati Mondal’s house.

Knowing all these, Moumita sensed the situation otherwise and was waiting for some uncanny turn with endless anxiety.

On 20.6.2020 Moumita came to know from the conversation of Rakesh and his father Taufiq that they have settled to sell out Moumita in an trafficking racket and the perpetrator Father and son already took an advance of Rs 20,000/- from a person of the racket.

Knowing this plan of trafficking, Moumita contacted with some rescue team in Vishwa Hindu Parishad (VHP) who rescued her on June 27 and kept her a safe place. VHP also arranged lawyer to fight against the obnoxious Love Jihad trap and the Trafficking racket led by Rakesh and his father Taufiq Tarafdar.

Unless, Moumita and the designated VHP and Bajrangdal Team could not be successful to make an escape from the Islamic trap of Love Jihad and Trafficking racket, the victim would be placed in any Nikah Halala equity market, Arabian women flesh trading or in the Harem of any impotent Arab billionaires! And all these were hitherto unknown to the rest of the world, if Moumita did not disclose her ordeal to HENB anyway.

The Hindu victims of Love Jihad are increasing day by day in India or in West Bengal. But, this most alarming that the Human trafficking rackets connected with Love Jihad rackets are faking all govt documents like birth certificate, EPIC, Aadhar, Pan cards etc for their vested Islamic interest as an easy game of play. 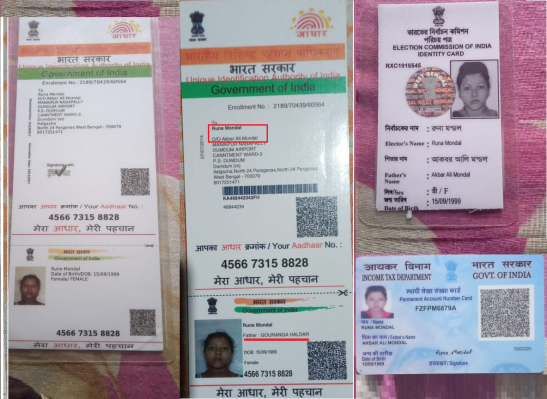 Knowing this case, the Hindu interlocutor and Hindu Existence website Editor told us that he will demand a formal CBI inquiry to crack down such faking agencies to produce false Govt documents like EPIC, Aadhaar, PAN Cards for the gain of Love Jihad and Islamic Human trafficking rackets.