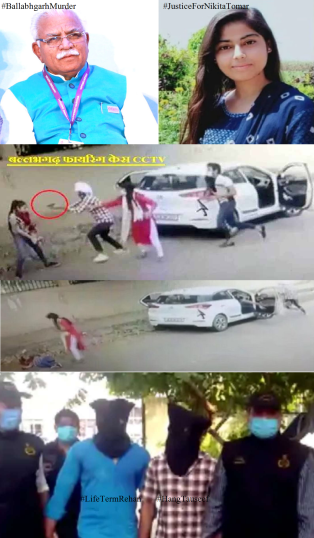 Upendra Bharti | HENB | Delhi | Oct 29, 2020:: It’s an another ebb tide in protests since Nikita’s murderer Tauseef was arrested following the arrest of Rehan, the driver of car used to ferry the Love Jihadi to shot dead his annoying fiancé in a broad day light.

On Monday, on October 27, a 21-year-old woman, Nikita Tomar was shot dead outside Agarwal College in Haryana’s Ballabgarh.

The CCTV footage went viral and it’s gut-wrenching to see how Nikita was struggling to free herself from the accused Tauseef who is seen forcing her to get inside his car. After she retaliates, he, without any hesitation, shoots her in the head and flees the spot.

The family of 21-year-old B. Com. Final year student Nikita Tomar has alleged that their daughter was being pressurized by the main accused Tauseef to convert to Islam.

The girl’s family, while pointing out to ‘love jihad’ as the main reason behind her gruesome murder, said that Tauseef had killed her after she refused to accept his demands and rejected his friendship

The murderer Tauseef is  the cousin of Congress MLA from Nuh, Aftab Ahmed.

While Tauseef was arrested from Nuh and his Driver Rehan was  arrested from Mewat  on Tuesday. They have been placed under  police custody for two days.

Haryana Chief Minister Monoharlal Khattar (who was a RSS Pracharak – whole timer over 40 years) tweeted+, “बल्लभगढ़ वाला अपराधी पकड़ लिया गया है और उसे बख्शा नहीं जाएगा” (The culprit of Ballavgarh has been arrested and he will not be spared).

The victim, 20-year-old Nikita Tomar and Tauseef had known since they were children – they went to the same school. But, out of Islamic culture Tauseef started sexual misbehavior with Nikita. In September, however, Nikita had filed a molestation complaint against Tauseef, but the case was withdrawn after Tauseef apologized.

Nikita’s father Mool Chand Tomar alleged Tauseef had been harassing her for several months now and she had filed a molestation complaint against him in September. “He had been persistently calling her up for the past few weeks and pressuring her to convert to Islam and marry him, but she had refused,” Tomar said. 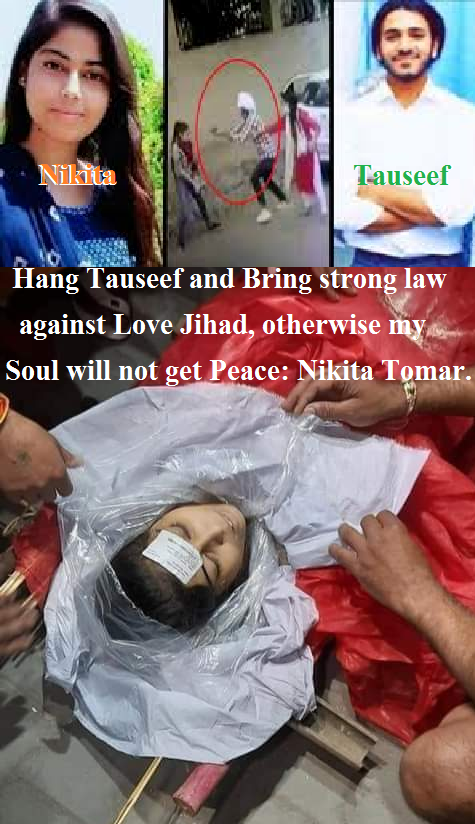 Other family members told HENB that even Tauseef ’s mother had called up Nikita several times to ask her to convert.

According to police, Tauseef had allegedly abducted Nikita in 2018. A case had been registered back then but was withdrawn by Nikita’s family later after a panchayat was held, police sources said.

Nikita’s family members alleged they had been pressured to do so by Tauseef’s relatives, who wield considerable political influence in Nuh (Tauseef’s uncle is Congress MLA from Nuh Assembly Constituency) and that Nikita’s family had been assured Tauseef would not trouble her anymore. On the molestation complaint and the family’s allegations, Faridabad police commissioner O P Singh said they were looking into the matter.

Singh said 10 teams had been formed to catch the accused, who had fled to Nuh via Palwal. An FIR against Tauseef and Rehan has been registered at Ballabgarh police station under IPC sections 302 (murder) and 34 (common intention) and relevant sections of the Arms Act. The country made pistol that was used for the murder and thrown at the spot has been recovered, police said. Taking cognizance of the matter, Haryana Women’s Commission sought a detailed report from police, with chairman Preeti Bhardwaj saying the incident “highlights faults in our system, which needs fixing”.

This was in short about the frightful end of a ploy of Love Jihad that has taken the life of a pretty Hindu woman Nikita Tomar by a jilted Love Jihadi Tauseef who had allegedly changed his name to Ankit to get in touch with the deceased during school days.

Now, many Hindus who are becoming the part of Hindutva and the proactive Hindus on the internet and various online social media groups, all influenced by RSS-BJP are blaming the selective secular media and their Congressi patrons and raising the question, why they are not vocal for Nikita?

Read also: Nikita Murder- How long will the patience of Hindus been tested?

These blind and blunt RSS-BJP supporters know very well that these secular and pro Islamic Congressi elements will never speak for Hindus. But the Bhakt people (RSS-BJP supporters) are not spending a single word for the responsibility of Haryana CM Monharlal Khattar.

If the murder of Nikita Tomar by a Jihadi element happened so in Dhulagarh of WB or Kasaragod of Kerala instead of Ballabhgarh of Haryana, the same Bhakt people obviously would run their campaign for the resignation of WB CM Mamata Banerjee or Kerala CM Pinarayi Vijayan.

Though, we don’t want the resignation of Haryana CM Manoharlal Khattar, we must ask him why the epicenter of Jihad, Mewat  is not being combed to annihilate the Jihadis forever. Mewat, the highest Muslim majority district in Haryana which is operating all the Jihadi activities in Nuh, Faridabad, Farukh Nagar, Gaziabad, Noida and obviously in national Capital of Delhi.

In recent times the killings of Sushil Kumar, Rahul Rajput, Ankit Saxena, Dhruv Raj Tyagi, Riya Gautam, Yogesh Kumar, Jagdish Driver  and obviously the Jihadi riots and violence against CAA & NRC [1][2][3][4] in Delhi prove that the Jihadi activities in this region are all time high and perhaps connected with Mewat module of local jihad or may be connected with any bigger chain of the Islamic fundamentals.

BJP Govt in Haryana and  the Union Govt in Home Department which directly controls Delhi Police must annihilate subversive Jihadi forces  immediately from Mewat, Nuh, Faridabad, Gaziabad and Greater Noida. Otherwise, not only the mothers, sisters, daughters and wives will be unsafe in Hindu families; the internal security of National Capital will be at a stake in any point of time.

The incriminating Hindu indulgence to allow their girls and women to mix with Muslim guys and their families is nothing but a sin which caused the unfortunate murder of Nikita Tomar by an uncivilized Muslim like Tauseef Ahmed. 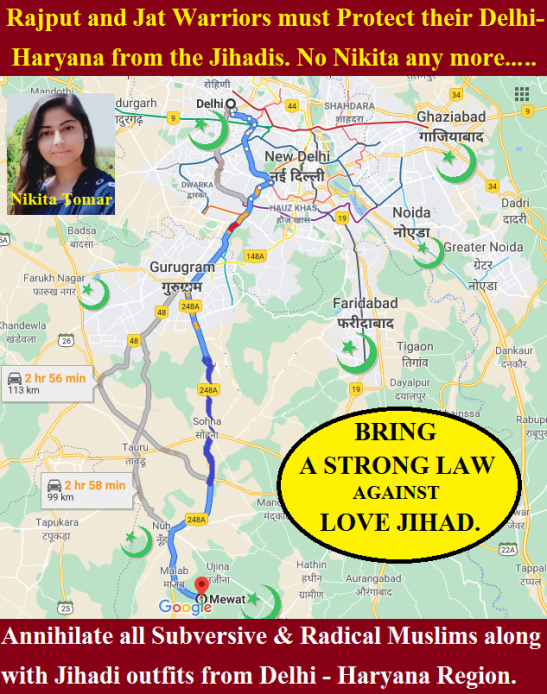 It’s strange how the Rajput, Jat and Tomar community people will bear such an insult to them. They must retaliate and take a vow to save their woman clan and the prestige of the nation from the dead hands of Jihadis.

Nikita’s departed soul demands fast track trial of the case with capital punishment for Tauseef and Rehan along with strong law to prevent Love Jihad and a Jihad free India.

Love Jihad is not a problem of Haryana or Delhi. In interfaith relationship Hindu boys are killed brutally if they venture to marry Muslim girls+.  Even, Love Jihad and Honor Killing are not only a National problem, it is now universal[1][2][3]. A strong law against Love Jihad is highly demanding.